Awesome New Republic is a two member indie band based in Miami, Florida. Both band members graduated at Frost School of Music and their first album, released in 2005, was well received by the critics. Together with their label Honor Roll Music they decided to try out quite an innovative marketing strategy to promote their latest album.

In order to get the word out, the label booked a monthly banner advertisement campaign on isoHunt, and linked that to a torrent file of the album that everyone can download for free. By doing so they hope to get people excited about their music and eventually build a strong fanbase.

“As far as we know, we are the first record label/band to advertise directly on a torrent search engine,” Colin Foord, the creative brain behind the campaign told TorrentFreak. “We are sponsoring isoHunt with a banner that links directly to our homepage where the album can be downloaded for free.” 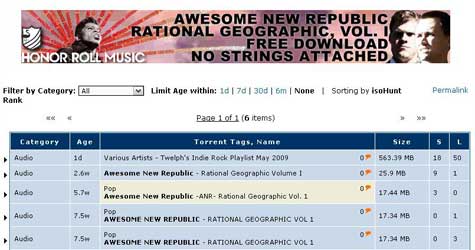 In a music industry that is changing quickly, Honor Roll Music recognizes that torrent sites such as isoHunt should not be vilified, but turned into partners instead in order to reach millions of music fans eager to discover and download new music. BitTorrent sites have proven to be a stepping stone for developing artists, rather than a threat.

With a limited marketing budget the label can’t afford to buy ad space on all major torrent sites, but the isoHunt sponsorship is a sign of good faith and shows that they do recognize the value of reaching out to the millions of active BitTorrent users.

The latest Awesome New Republic album titled “Rational Geographic Vol 1” is available on several torrent sites, and everyone is free to download a copy and share it with friends. Volume II will be released in July and Volume III, with a physical 3-volume bundle, in October.