Record Labels Should Sue Us in Russia, YouTube Rippers Suggest

In 2018, a group of prominent record labels filed a piracy lawsuit against two very popular YouTube rippers, FLVTO.biz and 2conv.com.

The labels, including Universal, Warner, and Sony, accused the sites and their Russian operator Tofig Kurbanov of facilitating massive copyright infringement.

While many foreign site operators choose not to fight back, Kurbanov dug in his heels. With help from a seasoned legal team, he filed a motion to dismiss arguing that US courts don’t have jurisdiction over a Russian site operator who conducts his business outside of the US.

Initially, the district court agreed with this defense, dismissing the case. However, the record labels successfully appealed, and after Kurbanov’s petition at the Supreme Court was denied, the case is now back at a Virginia district court to answer outstanding jurisdiction questions.

In its first decision on the motion to dismiss, the district court chose not to conduct a “reasonability test” because the other arguments were sufficient to come to a decision. This will now be the first point on the agenda.

Last Friday Kurnanov’s legal team asked the court if it could bring in extra information to complement its motion to dismiss. According to their filing, this shows that there is a reasonable alternative to a US court case. The music companies could simply file a lawsuit in Russia.

This idea isn’t new and the labels have countered the proposition already. Kurbanov’s lawyers are aware of this and even highlight that stance in their filing.

“In their opposition to Mr. Kurbanov’s Motion to Dismiss, the Plaintiffs argued that it would be a ‘startling suggestion that Plaintiffs should travel to Russia to assert their rights under U.S. copyright law,’ and that doing so was ‘not an effective strategy for vindicating rights under American law or for obtaining meaningful relief against internet pirates’,” Kurbanov’s lawyers write.

However, the lawyers also note that they have discovered new information showing that several of the labels have already been active in Russian courts in other copyright battles. Apparently, traveling to Russia wasn’t an issue there. 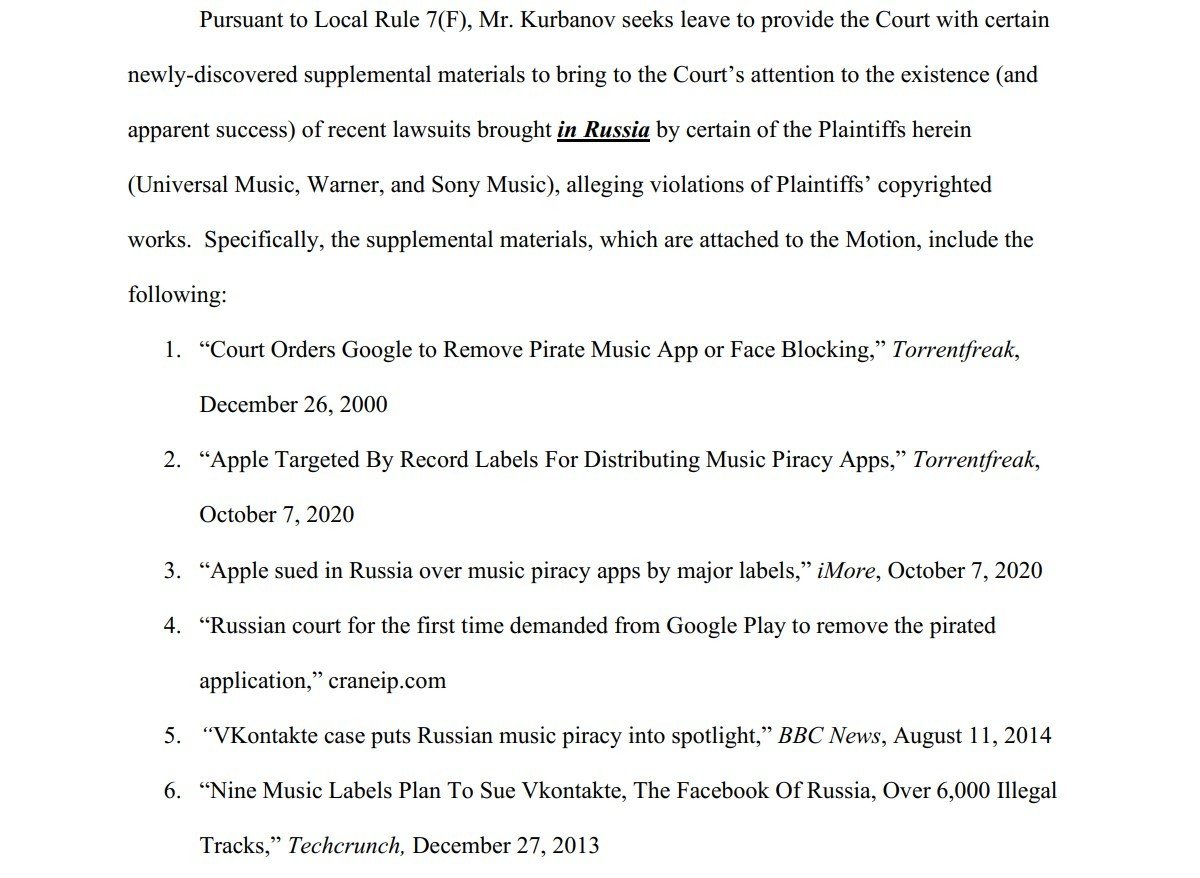 The defense argues that, given this new information, the suggestion to fight this case in Russia isn’t as “startling” as the record labels suggest.

“These materials demonstrate that Plaintiffs are clearly comfortable in the Russian courts and have effective means to protect their rights in Russia, where Mr. Kurbanov lives; where he operates the websites in question; and where every alleged act underlying Plaintiffs’ claims took place,” Kurbanov’s lawyers argue.

Soon after the court received the request to add these articles to the record, the music companies indicated that they will oppose the request. They plan to submit their counterarguments in the near future.

One reason why the record labels likely prefer a US court is because of the DMCA’s restrictions on bypassing technical protection measures. Those are central to the argument that YouTube rippers facilitate copyright infringement and are not available in Russia.

A copy of Mr. Kurbanov’s memorandum in support of the motion for leave to file supplemental materials is available here (pdf)