With millions of visitors, YTS is one of the most-visited torrent sites on the Internet, even rivaling the legendary Pirate Bay.

The site ‘unofficially’ took over the YTS brand when the original group threw in the towel in 2015. Since then it has amassed a rather impressive user base.

This meteoric rise hasn’t been without issues. The site’s parent company Techmodo Limited and its operator have been targeted in several lawsuits and previously agreed to pay over a million dollars in settlements. In addition, YTS has had several domain name troubles as well.

When the site first entered the scene it was operating from the YTS.ag domain name, which it traded in for YTS.am two years later. In 2019, the torrent site moved yet again to a new domain, YTS.lt, which was later switched to YTS.mx.

The Mexican ccTLD has served the site for well over a year but today it suddenly became unreachable. Users who try to visit the site will see a browser error instead, indicating that there’s no A record defined, which makes it impossible to resolve the domain.

This issue can appear in a wide variety of cases but in this instance followed an intervention from domain registrar Gandi. A few hours ago, the French company changed the status of the YTS.mx domain to clientHold, which is a punitive measure. 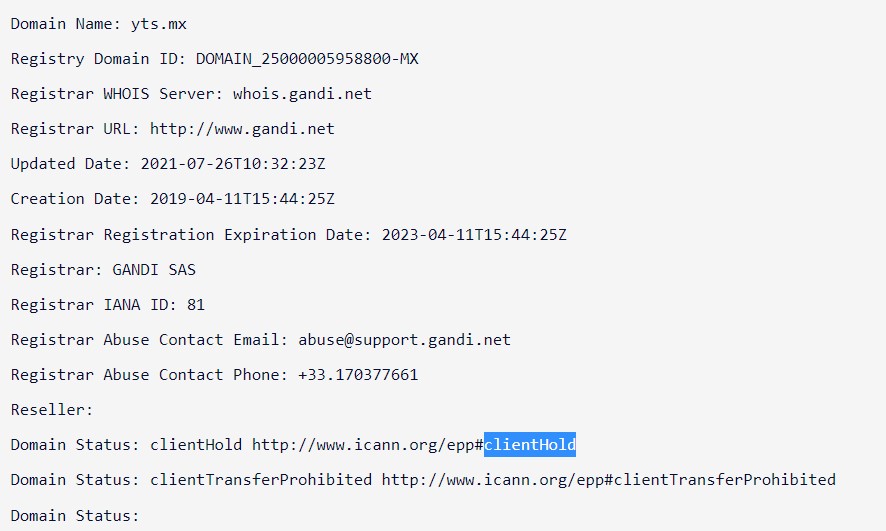 In the past, the clientHold status has been used to suspended pirate sites after complaints from copyright holders. Whether that’s the case here is unknown, as the registrar didn’t immediately reply to our request for comment.

Gandi lists an “expired” domain as the most common reason, but that’s clearly not the case here. According to ICANN, the clientHold status is “usually enacted during legal disputes, non-payment,” or when a “domain is subject to deletion.”

Out of all these reasons a legal dispute seems to be most likely. This doesn’t necessarily have to be copyright-related. It’s also possible that a third party complained about the accuracy of Whois records, for example.

Regular readers may also recall that several YTS-related sites were sued in the past due to trademark disputes. The YTS trademark was officially registered by the Hawaiian company 42 Ventures last year, and the company actively enforces its rights. However, the company informs TorrentFreak that it didn’t complain to Gandi.

At this point, it’s unclear if the YTS.mx domain will become available again in the future. According to the YTS status page it’s still the official domain but that may change in the near future.

Update July 27: After a day the clienthold status was listed by Gandi. The domain is back online again.