India began blocking websites in the late 1990s and even today sites are blocked with no explanation. Just this week, VLC’s website was unblocked by ISPs after months in the dark but why it was blocked at all remains a mystery.

For at least the last decade, India’s courts have also authorized injunctions that compel local ISPs to block domains linked to alleged copyright infringement. The Pirate Bay was one of the more obvious targets but with blocking requests containing first dozens, then hundreds of domains, an overall picture was hard to determine.

Copyright injunctions are more easily tracked today but the pace is relentless. India’s Department of Communications has processed at least 130 court orders since April 2022, including one against Z-Library and another containing more than 13,000 domains. And the orders don’t stop at ISP blocking either.

ISPs Must Block Domains, Registrars Must Disable Them

Star India and Novi Digital Entertainment own broadcasting rights for various sporting events including cricket, football, tennis, hockey and Formula 1. In an effort to reduce piracy of cricket matches broadcast as part of the Asia Cup 2022, they asked the Delhi High Court for a site-blocking order targeting 11 domains. 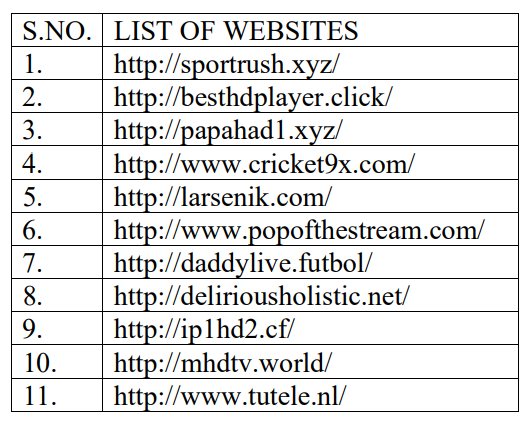 In an order dated August 22, 2022, Justice Prathiba M. Singh was happy to oblige. Agreeing that the plaintiffs had a prima facie case of infringement, she issued an ex-parte interim injunction which required Indian ISPs to block access to the domains.

To prevent the sites from regaining an advantage by switching to new domains, the Judge said the order would be ‘dynamic’ and applicable to any new domains.

The Judge ordered these foreign companies to immediately block domains under their control and hand over their owners’ names, addresses, email addresses, phone numbers and IP addresses, plus records relating to payments and processing.

The domain registrars were furthered ordered to identify any other domains owned by the 11 domain owners and hand those details over too. These orders would also apply to any other domains identified by the plaintiffs, the Judge added, further futureproofing the injunction.

What Could Possibly Go Wrong?

When Star and Novi Digital requested a blocking injunction against the 11 domains, the Asia Cup 2022 cricket tournament hadn’t even started. The applicants’ said that since these domains were linked to earlier infringement, they might infringe their rights in the future. Justice Singh agreed and handed down an injunction dated August 22, 2022.

Asia Cup 2022 got underway just four days later and by September 11, 2022, it was all over. A filing at the Delhi High Court dated November 9, 2022, contains many of the Judge’s instructions in bold, underlined italics, suggesting that things hadn’t gone well.

Indeed, NameCheap, DynaDot, Tucows, Gransy and Sarek Oy, did not comply with the terms of the injunction, the plaintiffs say. In response to a call for compliance, NameCheap responded as follows:

In such situations, it is advised to appeal to a court of competent jurisdiction. In order for us, as a U.S.- based company, to take the actions you are requesting, we require a U.S. state or federal court order or subpoena. If a U.S. court order is received, we will abide by any decision stated therein. If you already have a U.S. court order, please forward it, along with your request and contact information, to our Senior Legal department directly via [email protected]

After reviewing correspondence with other domain registrars (DNR), Justice Singh notes that the Court “reiterates its prima facie view that all DNRs have to abide by and give effect to orders passed by competent courts, government authorities, etc.”

The Judge says that the registrars are bound by the Information Technology (Intermediary Guidelines and Digital Media Ethics Code) Rules, 2021 (pdf), which requires them to appoint ‘Grievance Officers’ to ensure compliance with Indian court orders, orders that they have not complied with.

Justice Singh goes on to cite ICANN agreements governing relationships between registry operators, domain name registrars, and the domain name registry. These agreements “make it abundantly clear that DNRs have to respond adequately to governmental or semigovernmental authorities operating in any country.” In her view, the listed registrars failed to meet this standard.

Star India and Novi Digital previously admitted that they have no idea who operates the 11 domains or where those people are located, India included. However, a recent copyright case involving Telegram and handled by the same Judge found that India does have jurisdiction; the plaintiffs reside and do business in India, infringing content circulated in India, and the platform supplying the content was accessible in India.

Whether international domain registrars can be reasonably ordered to suspend domains on almost zero notice, based on allegations of copyright infringement violations that haven’t happened, remains to be seen. These things aren’t impossible to navigate but four days maximum doesn’t make the process any easier. Star India won the rights to the Asia Cup in 2018 leaving plenty of time to get a dynamic injunction put in place.

Of course, the Asia Cup 2022 itself is now resigned to history but Justice Singh is in no mood to move on without the registrars being held to account.

In orders directed at India’s Department of Communications and Department of Electronics and Information Technology (DeiTY), Justice Singh allocates one week for action to be taken against NameCheap, DynaDot, Tucows, Gransy, and Sarek Oy, for non-compliance with the Court’s orders.

“The authorities shall also look into the question as to whether these DNRs ought to be permitted to continue to offer their goods and services in India,” the Judge adds, “if they are not giving effect to orders of Indian Courts and not complying with the applicable laws under the Information Technology Act, 2000, and the 2021 Rules.”