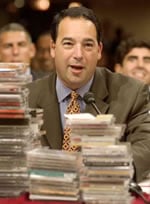 Bainwol’s support for McCain doesn’t come as a surprise when you look at his career history. For more than a decade he worked for the Republican Party, putting his lobbyist skills to work. In 1987, Bainwol was the campaign manager of Republican Connie Mack’s successful senator campaign.

That was only the start of his Republican career. A year later, Bainwol was appointed Chief of Staff to Mary Bono, who was one of the biggest supporters of the (Sonny Bono) Copyright Term Extension Act. Mary Bono later married the son of Connie Mack. Both are still are active Republicans, and received generous donations from Bainwol recently.

They were not the only ones Bainwol donated to. OpenSecrets reveals that he has also supported John McCain to the tune of $2300, the maximum amount he is allowed to donate. MPAA CEO Dan Glickman, on the other hand, has more sympathy for the Democrats, as he donated $5000 to the Democratic Congressional Campaign.

While the RIAA CEO is supporting McCain, most people from P2P companies support the Democratic candidate, Barrrack Obama. As P2P-blog points out, Limewire, Joost and Pando employees donated generously to Obama, and so did BitTorrent inventor Bram Cohen. This makes sense, as Obama seems to have the most reasonable ideas when it comes to copyright, privacy and net-neutrality.

Earlier this year the US Pirate Party endorsed Obama. Andrew Norton, a spokesperson for the US Pirate Party told TorrentFreak at the time: “We stand solidly behind Mr. Obama, as he is the only candidate that seems to realize that personal privacy is a right, not a privilege, and believes that copyright is, as the constitution defines, for progress, rather than profit.”