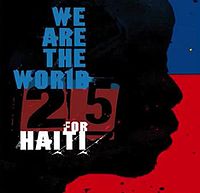 The original “We Are The World” single released in 1985 to help Africa was the first single to receive multi-platinum certification. It brought in millions of dollars for humanitarian aid and still holds the record for the fastest selling single in the USA.

Dozens of contributing artists waived their rights and performed free of charge to maximize the revenue for Africa. In an attempt to replicate this success, a group of artists recorded “We Are the World 25 for Haiti” following the devastating earthquake in Haiti, hoping to raise money to help those in need.

Although most people realize that donating directly to Doctors Without Borders or the Red Cross is a more efficient way to donate, the initiative was obviously started with the best intentions by most of the people involved. According to the RIAA however, there is also a group of people who deliberately try to “steal” from this fundraising campaign – music pirates.

In a recent blog post the RIAA dramatically claims that “the album is now widely available on illicit BitTorrent sites like The Pirate Bay, Torrentz and more. The posting highlights a truly ugly side of P2P piracy – the undermining of humanitarian fundraising efforts via online theft of the ‘Hope for Haiti Now’ compilation.”

The RIAA basically says that pirates are purposely stealing money from Haitians. But are they?

In a response to the RIAA’s writing, Music Ally dug up some numbers and they found out that compared to most other popular singles the number of downloads the song gets are really low. Aside from this, one has to wonder if those who downloaded the song would have paid for it if it was not available on BitTorrent. Perhaps they already donated through a more direct channel?

Techdirt further notes that the RIAA blames sites like Torrentz which doesn’t even store torrent files, while they leave out Google, the site through which their source actually found the torrents.

What most people missed though, might make the RIAA’s post look even more hypocritical. Charity singles such as “We Are The World” actually bring in a lot of cash for the record industry and related businesses. This could be easily framed as “Stealing from Haitians” as well.

Columbia Records fared well with the release of the first “We Are The World” single and the performance rights that still come in today continue to benefit the “copyright holders.” In addition, charity songs including “Do They Know It’s Christmas?” ended up on thousands of compilation albums for which the charities probably never saw a penny.

We were unable to find out exactly how long the profits of the new Haiti single will actually go to Haiti, but we’re sure that the music industry will take a cut regardless. Similarly, iTunes will give up their share for a few months but will be profiting from the single later on.

These examples show that reality is always a bit more balanced than how the RIAA portrays it. Nonetheless, those who actually like the song should definitely consider buying it or at least donate to one of the other charities that benefit Haiti.