With well over 100 million active users a month, uTorrent is without doubt the most-used BitTorrent client.

In recent years uTorrent has transformed from a relatively ‘geeky’ and minimal application into a BitTorrent client that should appeal to a mainstream audience.

Another step in this direction has just been taken with the newly released stable build of uTorrent 3.1, now with a built-in media player. This player allows users to watch videos or listen to downloaded music without having to leave uTorrent.

Another new feature, one that was already present in early beta releases, is integration with external devices including the iPhone, iPad, PS3, Xbox 360 and Android hardware. This allows users to quickly sync downloaded content to these devices.

And that’s not all the uTorrent developers have been working on lately.

Plus enables users to convert videos to formats that are compatible with external devices. It also comes with built-in anti-virus, remote file-transfers and a built-in media player.

Converting a file with Plus 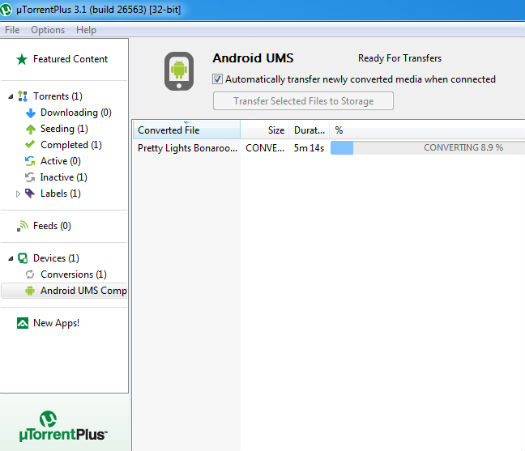 “Our goal was to enhance uTorrent to be a powerful tool that lets you free your personal content from the PC. Plus adds key features needed to accomplish this, and then adds security to keep you safer,” says uTorrent’s director of product management Jordy Berson.

Users who now visit the uTorrent website will see that they can choose between the free and the plus version of the BitTorrent client. Existing free users will also see an “upgrade to plus” banner in their clients, but this can be disabled. Aside from putting work in the Plus version, the uTorrent team will continue developing the free client in the coming years.

Are you a uTorrent user? Let us know what you think about the new free features and the Plus version in the comments.