Popular stream-ripping site Yout.com has been targeted in lawsuits around the world. As a result, the service is now blocked in countries including Denmark, the UK and Spain.

In addition, government agencies targeted the site and its operator in Brazil and Peru, further adding to Yout’s legal troubles.

Despite all of this legal pressure, Yout.com operator Johnathan Nader is convinced that his service operates within the boundaries of the law. To make this clear, he sued the RIAA, asking a Connecticut district court to declare that the site does not violate the DMCA’s anti-circumvention provision.

The decision to sue the RIAA was a bold one but not without consequences. After a legal battle of nearly two years, the verdict meant disappointment for Yout. Judge Stefan Underhill ultimately concluded that the service had failed to show that it doesn’t circumvent YouTube’s technological protection measures.

The court not only ruled in favor of the RIAA, it also held that “repleading is futile.” This means that Yout is not allowed to amend its complaint to try again at the lower court.

The case is not completely closed, however, as Yout indicated that it would appeal the decision. And indeed, an official notice of appeal was filed at the 2nd Circuit court last week.

The RIAA is not pleased to see the case continue so it reached out to Yout in the hope of resolving the matter. That didn’t lead to the desired result, so the music group is back in court this week, demanding $250,000 in attorneys fees.

According to an emboldened RIAA, Yout’s lawsuit was destined to fail from the start.

“Yout’s suit was meritless from the beginning,” RIAA writes, adding that “Yout’s conduct violates the express prohibition in YouTube’s Terms of Service and is textbook circumvention.”

“In the face of these obvious facts, Yout brought an unreasonable suit to achieve a legally unjustified result: publicity for its illegal service and prolonging its ability to offer its users a circumvention device to illegally rip downloads of record companies’ valuable copyrighted works.”

Courts can award attorney fees to the prevailing party under certain conditions. This includes an evaluation of the frivolousness and unreasonableness of the claims, the party’s motivation, and the potential need for deterrence.

The RIAA argues that Yout filed the lawsuit in part to promote its stream-ripping service. It would also secure the revenue stream it generates, while the legal battle is ongoing.

The case was initially filed because Yout felt that the takedown notices sent by the RIAA to Google defamed the service. However, the RIAA clearly sees a different motive.

“Yout sought money from RIAA based on the false and implausible assertion that RIAA defamed and disparaged Yout when it told Google that Yout was illegal stream-ripping technology. Ironically, Yout then amplified that message by seeking out news coverage of this litigation,” the RIAA notes.

“In reality, it seems that Yout believed it could attract new users and attempt to obscure the blatantly illegal nature of its service by publicizing the lawsuit.”

Considering its magnitude, the case was indeed picked up by news outlets, including TorrentFreak. Yout’s operator then posted these headlines on social media to promote his service, the RIAA claims.

This line of reasoning is presumably used to argue that Yout’s lawsuit had an ulterior motive. A screenshot shared by the RIAA aims to drive home this point. 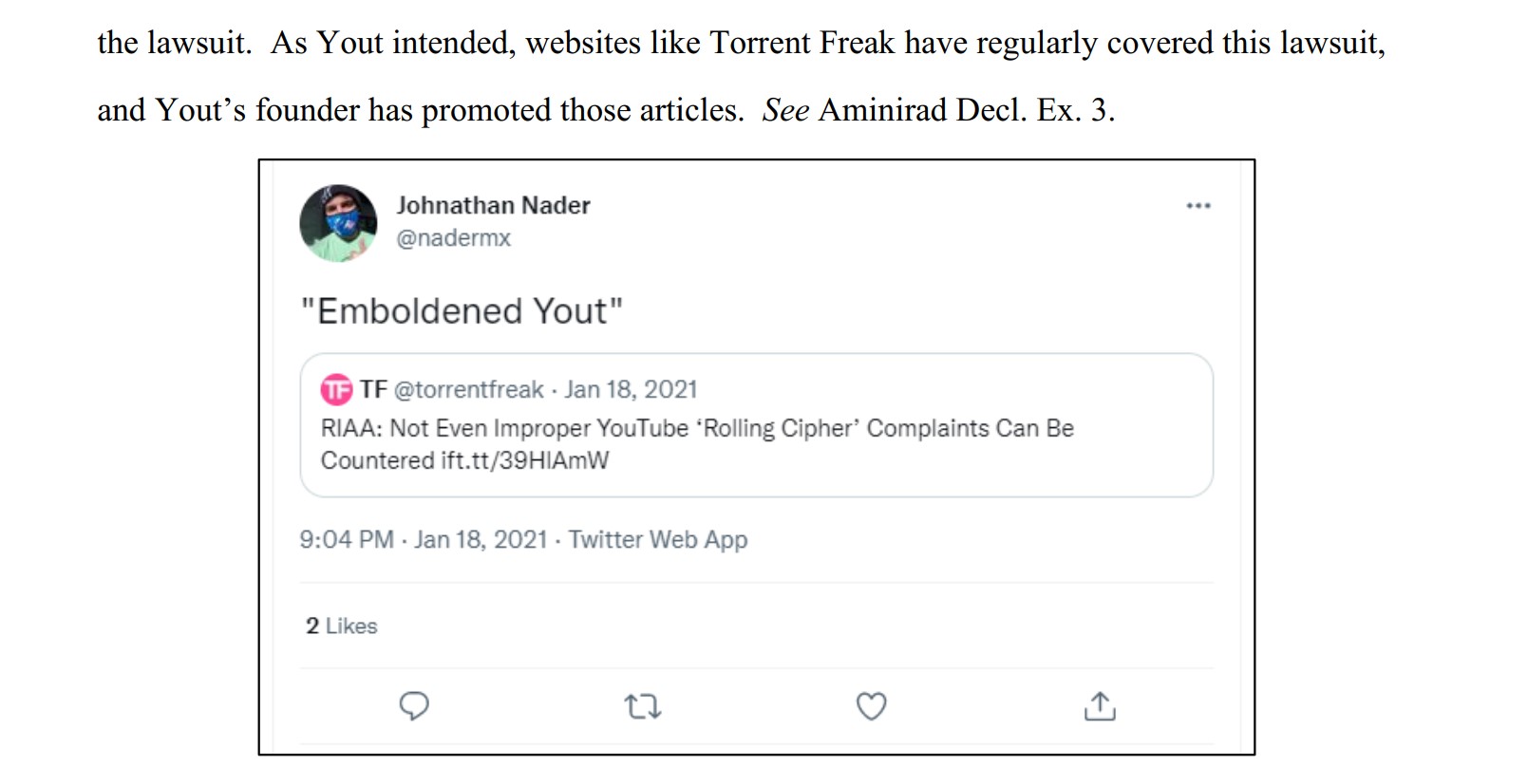 “Mr. Nader has frequently retweeted the articles, proclaiming that he had ‘made the news today’ and that Yout was ’emboldened’,” the RIAA adds.

– Sidenote: The article linked in the tweet is actually an overview of RIAA’s arguments against Yout. This isn’t particularly favorable for the service. Also, the “emboldened” part presumably doesn’t represent Nader’s views on the news; that’s a quote from the article pointing back to the youtube-dl issue. We obviously don’t know whether this tweet was meant to “promote” anything but with two likes and no retweets, it certainly didn’t go viral.

The RIAA further argues that Yout filed the lawsuit in the hopes of having its search results re-listed by Google, which could lead to an increase in users as well.

All-in-all, the music group believes that it’s entitled to attorneys’ fees. Not just to compensate its costs, but also to deter Yout and other stream-rippers from offering their services to the public.

“Attorneys’ fees are necessary here to deter Yout and similar stream-ripping services from making baseless claims that they do not violate DMCA and to compensate RIAA for the cost of defending this suit.

“RIAA respectfully requests that the Court grant its motion and award it $250,000 in attorneys’ fees thus far, and additional fees incurred in bringing this motion,” the music group concludes.