From BBSs, through Napster, torrent sites, and stream rippers, there’s been no shortage of targets over the past decades.

Despite efforts from the music industry to counter these ever-emerging threats, people who want to access music for free now have more options than ever.

While piracy is bad enough, there’s one thing that music insiders fear even more; pre-release leaks. So, when a website trades in these kinds of leaks in the open, alarm bells go off.

This was the case around a year ago when the mysterious “Music Mafia” group entered the stage. The group gained mainstream attention when two unreleased Kanye West tracks appeared online, way ahead of schedule.

The tracks soon made their way to YouTube, with many pointing out Music Mafia as the source.

More than a year has passed and the Music Mafia site is still up and running. In exchange for Bitcoin, it auctions and sells unreleased tracks, demos, and unreleased music videos. Even email addresses and phone numbers of artists are on the menu.

In the site’s “assortment” you’ll find popular names such as Beyonce, Coldplay, Drake, Hardwell, Justin Bieber and Katy Perry. The list of unreleased material is impressive as well, with dozens of records from David Guetta, Kanye West, and Travis Scott, among others.

Some of the unreleased tracks are auctioned off on a regular basis while others can be bought directly. The most exclusive releases are sold behind the scenes, all traded for Bitcoin. 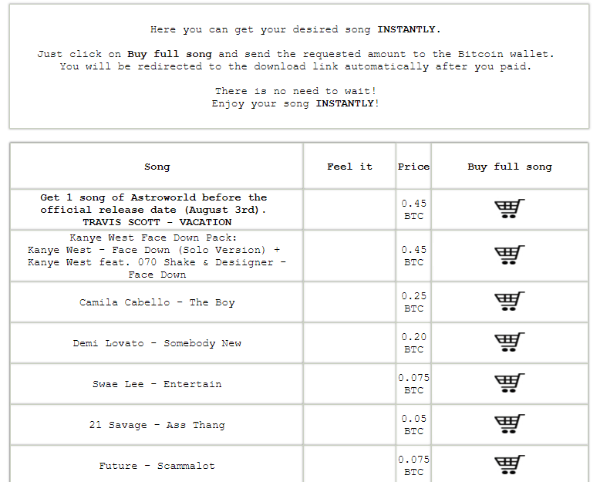 The music industry sees the anonymous group as a severe threat, something which pushed it onto the RIAA’s radar.

A few weeks ago the music group obtained a DMCA subpoena (pdf) from a federal court in the District of Columbia ordering Tonic Domains Corp, the registry of Music Mafia’s .to domain, to identify the associated registry.

“We have determined that a user of your system or network has infringed our member record companies’ copyrighted sound recordings,” RIAA wrote to the registry, requesting information.

“As is stated in the attached subpoena, you are required to disclose to the RIAA information sufficient to identify the infringer. This would include the individual’s name, physical address, IP address and e-mail address.”

Whether Tonic Domains Corp complied with the request is unknown. However, a few weeks have passed now and MusicMafia.to is still up and running as usual, trading unreleased music for Bitcoin.

One of the most intriguing questions is where this group gets its booty. Is it connected to rogue music industry insiders? Are they skilled hackers who get their treasure through digital means?

There are some hints that support the hacker theory. For example, last year Drake posted Music Mafia’s website address on Twitter. This tweet was swiftly removed and some suggested that the account had been hijacked.

Without more details, it’s hard to tell what’s going on precisely. What is clear, however, is that they are not bluffing. But neither is the RIAA…