Until last month, RipRequests was a popular hangout for those looking to download music without the hassle of paying and, in some cases, waiting for an official release to come out.

While that worked well for years, the release of Adele’s new album ’30’ last month resulted in the Discord server and associated Reddit forum receiving some unwanted attention.

According to RipRequests’ operator, they only leaked ’30’ around 10 hours before its official release but, under US law at least, that is a criminal offense that could potentially carry a sentence of up to 10 years.

What followed was a cease-and-desist from the RIAA which advised that “Such activity is illegal, and these actions must stop at once.”

In response to the complaint, Discord took down the RipRequests server while the RipRequests team voluntarily took action to set its Reddit forum to private, meaning that only approved members could take part in discussions.

With RipRequests in limbo, the only thing left to clarify was its potential return date.

On Saturday, a Twitter account associated with RipRequests posted an ‘interesting’ message indicating that the RIAA may have ruined someone’s weekend. We presume the tweet shouldn’t be taken literally but it seems fairly safe to conclude that the day might’ve been memorable for all the wrong reasons.

In a post to Reddit’s /r/riprequest (which was created after its sister sub was made private), user ‘BrodyArgo’, who identifies as RipRequests operator, posted the story behind his ruined weekend. According to him, the RIAA “somehow” found out where he lives and took the opportunity to hand-deliver a cease-and-desist notice. 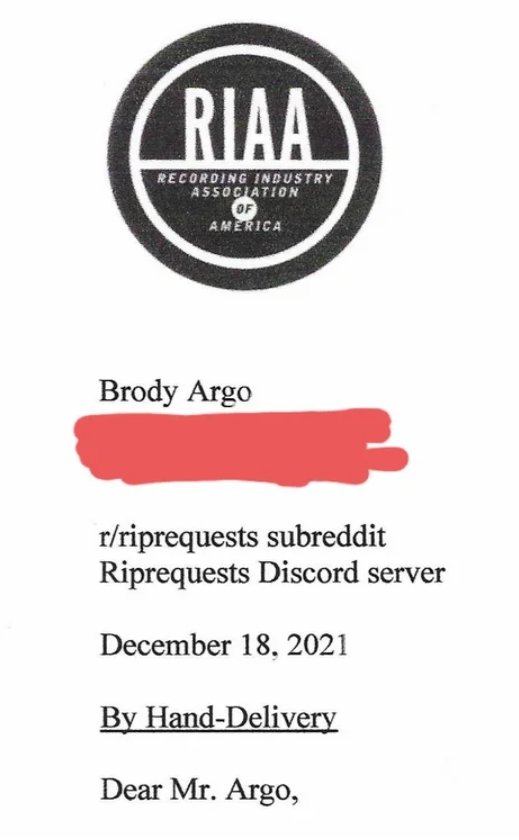 On Reddit, BrodyArgo responded to some questions from fans. Of note is that the RIAA reportedly ordered both the RipRequests Discord server and corresponding Reddit forum closed down. Permanently.

“Close the sub and discord,” he said of the RIAA’s demands. “Which I did. I’m not going to jail for y’all.”

No one mentioned involuntary cosmetic surgery so at this point it seems safe to assume the tweet was metaphorical. However, the people from RipRequests have released an interesting track on Bandcamp which appears to feature a telephone recording of an RIAA counsel issuing a warning to BrodyArgo’s parents about their son’s unacceptable behavior.

As BrodyArgo explains, the track is part of an album released by RipRequests to mark the end of the service and an era.

“After nearly 4 years, Rip Requests has finally shuttered its doors for good due to unforeseen circumstances (ok let’s be honest we all saw it coming),” he writes.

“This album was a [work in progress] that I was expecting to drop on Christmas, but I decided to expedite the release after today’s events. It is compiled of tracks submitted by the most talented members of the Rip Requests Discord server / members I reached out to, and I’d like to believe that it is a proper send-off.

“It has been an honor to chat with each and every member of the subreddit and Discord server. Thank you all,” he concludes.