Founded in 2006, RLSLOG.net was one of the pioneers of the ‘release blog’ format. When it first launched, visitors were able to read about the latest pirate releases, who had placed them online and, importantly, what the files were called.

Unlike so-called ‘pre databases’ that displayed only raw information, new releases on RLSLOG were presented in an article format with comments on the quality, source (such as DVDSCR or the now largely defunct Telecine), runtime, IMDB rating and format (Xvid, for example). Music was also broadly covered along with apps, games and other pirated content.

These articles also linked to Scene ‘NFO’ files but where the site broke relatively new ground was the addition of links where the files could be found on torrent sites including the long-dead Mininova. This information was welcomed by millions of pirates and in one stand-out moment, was even appreciated by a prominent filmmaker.

In November 2007, Eric Wilkinson, the producer of the independent film ‘The Man from Earth’, wrote an email to RLSlog in which he thanked them for the free promotion the site gave him. “In the future, I will not complain about file sharing,” he wrote, “When I make my next picture, I just may upload the movie on the net myself!”

More than 10 years later, however, The Man From Earth director Richard Schenkman was describing pirates as an “existential threat” to all creators. That position was also held by the broader entertainment industries a decade earlier so, with growing numbers of visitors to RLSLOG, the site received plenty of attention from copyright holders.

(Note: An earlier version of this article incorrectly attributed the “existential threat” quote to Wilkinson)

RLSLOG Reported to the USTR

While a particularly unwelcome status, any site reported to the United States Trade Representative by copyright holders can consider itself well and truly on the map. In 2010, RLSLOG was reported to the USTR by the RIAA, labeled a ‘notorious market’ worthy of enforcement action. At the time, RLSLOG had grown into the world’s most popular release news site, a position not lost on the music industry.

“www.rlslog.net has thousands of pre-release or recently released music titles available on the site. For each title there are multiple one-click download links known as ‘mirrors’,” the RIAA told the USTR.

“Due to the speed of which content and mirror links are added, this site enables users to download pre-release titles quickly but also request new links if older links have been removed.”

During the same year as the RIAA filed its complaint with the USTR, RLSLOG was pulled offline by its German hosting company following a takedown request from Universal Music. A couple of months later it was down again, this time kicked out by its new Netherlands-based host. Even greater pressure lay ahead.

Late 2012, RLSLOG received threats from the prominent law firm Wiggin LLC acting on behalf of the Hollywood studios. They claimed that around 94% of all content listed by RLSLOG was material to which they owned the copyrights. RLSLOG’s owner contested that but nevertheless considered action in response, including the removal of third-party download links.

In the following February, RLSLOG confirmed that all direct links to movies and TV shows would be removed. However, these were replaced with pre-filled Google searches, enabling the search engine to direct people to content instead.

The Beginning of the End

For many of the years that followed, RLSLOG continued to serve its userbase while mostly staying out of the headlines but with millions of users turning to legal services such as Netflix, the site’s position in the overall market changed.

The site still enjoys considerable traffic even today but this morning RLSLOG founder Martin revealed that the site had shut down for good. 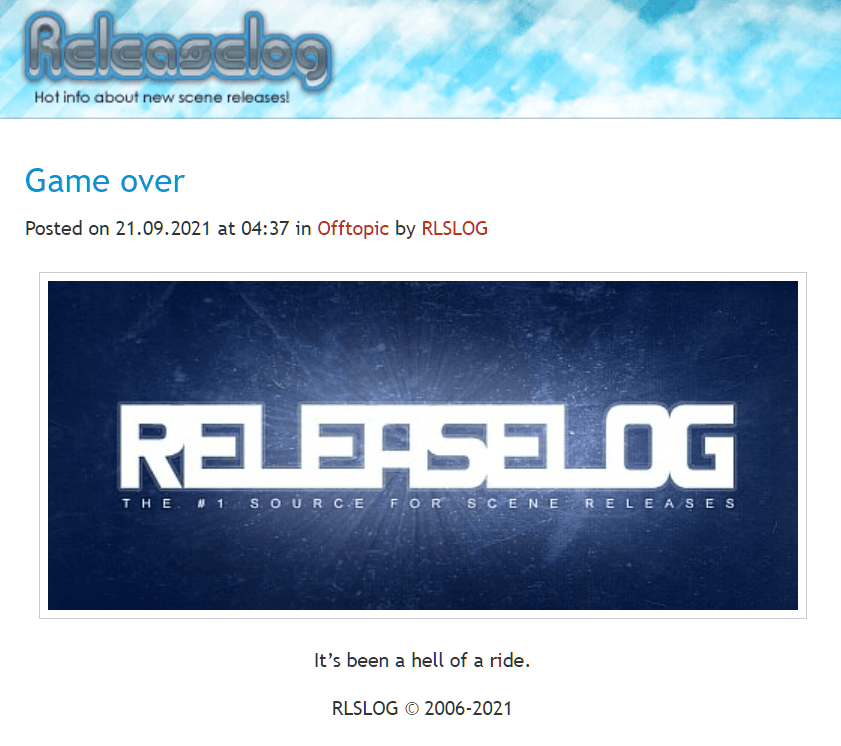 Martin informs TorrentFreak that the time was right to step away.

“There is no big reason behind the announcement, we simply decided to focus on other projects and move on, to close this amazing chapter,” he explains.

“We have been and we will always remain the very first and also the most visited filesharing blog in the world with hundreds of thousands of loyal readers. For 15 years in a row we provided the fastest and most comprehensive information about the scene and non-scene releases.”

Martin also cites the changes in the supply of content as a factor, noting that today’s emphasis on streaming played a part in his decision to shut RLSLOG down.

“The filesharing environment has changed a lot in recent years with more and more users paying for content through Netflix, Amazon Prime and other services, or switching to online streaming, which also played a role in our decision. Anyway, beautiful memories and strong friendships will prevail after this amazing chapter and RLSLOG will always be a part of the filesharing history.”

According to a post on RLSLOG, the site is currently for sale. Whether any prospective buyer will attempt to pick up where RLSLOG left off is unknown but they will have big boots to fill and a long history that in today’s environment will be all but impossible to replicate.