As the horrors caused by Russia’s invasion of neighbor Ukraine continue, the geopolitical and financial implications are being felt throughout the world.

Dozens of countries aligned with the defense of Ukraine have implemented unprecedented sanctions. From withering restrictions on Russia’s banking system to a simple refusal to do business, the desire is to restrict Putin’s ability to wage war.

On a public level, US and EU entertainment companies have also suspended business, meaning that Netflix, Spotify and similar services are a thing of the past. Hollywood studios Paramount, Disney, Warner Bros., and Sony announced a suspension of new movie releases, meaning that at least for the foreseeable future, blockbusters such as The Batman won’t be seen on Russia’s big screens.

Well, that was the plan at least.

In the wake of Hollywood’s unprecedented suspension of new releases, Russia’s Association of Cinema Owners issued a powerful statement. Representing 700 cinemas and 2,600 screens across the country, the group said that the collapse of the entire film industry was on the horizon.

“We express concern about the high probability of liquidation of the entire film industry in the country in the context of the introduction of large-scale and unprecedented sanctions by a number of states against the Russian Federation, including those directly related to cinemas,” the Association warned.

“Unfortunately, the quantity and quality of Russian films released to the public does not meet the full demand of cinemas for content. In addition, the release of some Russian films, for reasons unknown to us, has been postponed from the next dates or completely canceled despite the fact that these films received state support for production.”

With predictions of an 80% loss in revenue, the Association called on the Ministry of Culture to offer assistance. Whether any was given is unclear but in the meantime, some cinemas have been taking drastic action to put people in seats.

Where There’s The Will, There’s a Way

Around the middle of April, posts on social media sites popular in Russia (VK, Telegram) suggested that cinemas in several regions would begin screening big Hollywood movies, including ones that should not be available. The Batman (Warner Bros.), Don’t Look Up (Netflix) and I’m Blushing (Pixar) were just some of the titles mentioned.

Just days later, screenings in several Russian cities were in full swing. On April 21, a special event at the WIP contemporary art center in Moscow featured The Batman. Tickets cost around 500 rubles (US$7.00) with the organizers framing the screening as an art performance with artistic commentary on Hollywood’s departure from the Russian market.

The source for the movie was unofficial, of course. The pirated copy – complete with Russian dubbing – was downloaded from an unnamed torrent site. Utilizing the same or similar source, additional movie screenings took place at several other venues, including the Grinvich Cinema in Yekaterinburg. 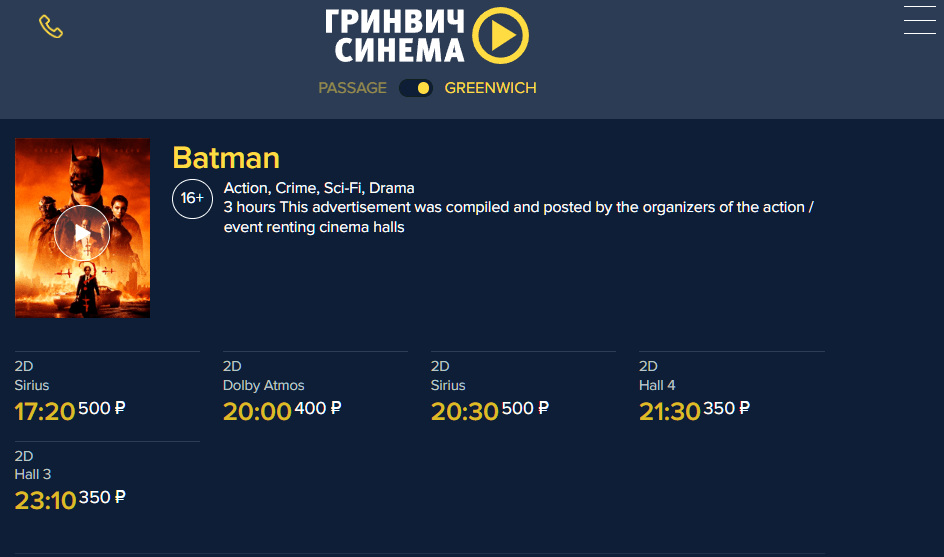 At the time of writing, the cinema is still allowing customers to book online to watch pirated movies, including The Batman which has five performances today alone.

Who is Behind These Illegal Screenings?

Given that movie piracy is illegal in Russia (despite recent news reports stating the opposite), it’s no surprise that some cinemas are attempting to distance themselves from illegality.

In the image above, the Grinvich Cinema notes that the listing for The Batman was “compiled and posted” by the organizers of a private event. A comment from the venue’s press office stressed that “The Grinvich Cinema doesn’t show Batman” but admitted it had reached an agreement with “companies” to rent three of its screens.

While liability for the screenings would be for a court to decide, several groups in Russia are publicly driving them. Among the most prominent are ‘Kino Non-Stop’ (Cinema Non-Stop) and ‘World Movies On the Big Screen’ which advertise screenings of movies on their VK social media accounts (1,2). 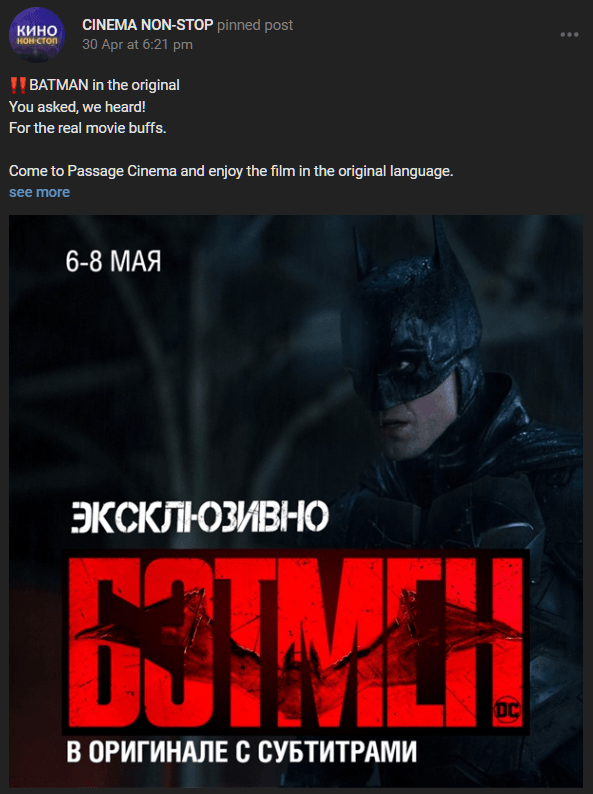 Smaller screenings are also being arranged less formally, with cinema-goers squeezing into small rooms and being charged nothing for the privilege. But whatever the scale, industry consensus is that such screenings are illegal and represent a return to the “dark days” of Russian cinema.

“The illegal public demonstration of pirated, or rather, stolen, copies of films in cinemas takes the Russian cinema business out of the legal arena and returns us to the dark days of the illegal business of the 1990s,” a statement from the Association of Cinema Owners reads.

“We understand that such cases are primarily caused by panic in the industry due to the lack of an effective government response to the current critical situation of Russian cinemas and the inability of the Russian film industry in the short term to offer spectacular films that are interesting to a wide audience of cinemas, despite the impressive support of the film industry at the expense of the state budget.”

Noting that there have been no changes to Russian copyright law that permit piracy, the Association says that unlicensed screenings breach both civil and criminal law.

“We condemn the practice of illegal screening of films in Russian cinemas and call on the entire professional film community to prevent such practices,” the Association concludes.

How this problem will be solved without a halt in hostilities is unclear. Reports of fans traveling to other countries to watch the latest movies at great expense are already emerging, but that is neither practical nor sustainable.

It appears that mass piracy is now firmly back on the public agenda and it seems unlikely that Western companies will be able to do much about it. Many social media posts express support for piracy, arguing that if Western movie companies hadn’t pulled out, there would be no need for illegal screenings.

While in simple terms that is broadly true, addressing why they pulled out in the first place also provides a clear roadmap for returning to some kind of normality.