The major record labels believe that YouTube rippers are the most significant piracy threat on the Internet.

These sites, which can be used for a variety of purposes, are used by some to convert free YouTube videos into MP3s.

Three years ago a group of prominent music companies took the operator of two of the largest YouTube rippers to court. The labels, including Universal, Warner Bros, and Sony, accused FLVTO.biz and 2conv.com of facilitating copyright infringement.

While many foreign site operators choose not to fight back, Kurbanov dug in his heels. With help from a seasoned legal team, he filed a motion to dismiss arguing that US courts don’t have jurisdiction over a Russian site operator who conducts his business outside of the US.

Initially, the district court agreed with this defense, dismissing the case. However, the record labels successfully appealed, and after Kurbanov’s petition at the Supreme Court was denied, the case is now back at a Virginia district court.

The Court of Appeals for the Fourth Circuit previously determined that Kurbanov purposefully directed activities at Virginia. This means that the district court only has to decide whether it is “constitutionally reasonable” to sue the Russian site operator there.

In an order released yesterday, US District Court Judge Claude Hilton concludes that it is indeed reasonable to continue the case in Virginia. As a result, Kurbanov’s motion to dismiss is denied. 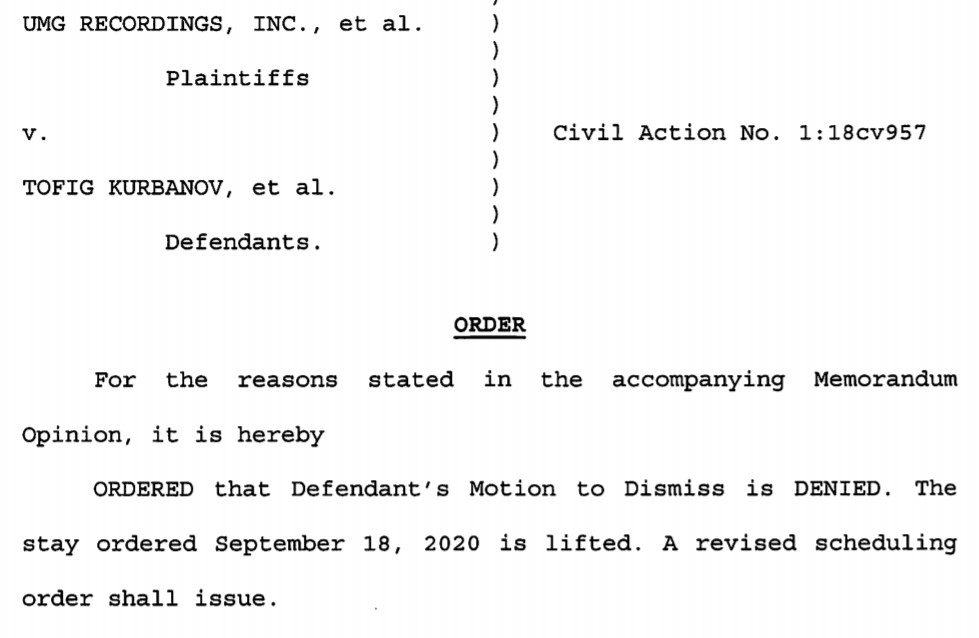 In his opinion, Judge Hilton considers the burden of litigating a complex lawsuit on foreign soil, agreeing that this burden is indeed great because of the geographic limitations.

“Defendant Kurbanov resides in Rostov-on-Don, Russia, more than twenty hours by plane from the Eastern District of Virginia. Defendant does not have a visa to visit the United States, and the nearest U.S. embassy for him to obtain one is a twelve-hour drive from his home,” Judge Hilton writes.

Burden is Substantial, Not Unreasonable

While the court agrees that the burden is substantial, it’s not necessarily excessive or unreasonable. The extensive litigation history suggests that the operator can still fight the case through his US-based legal team.

“Judging from the many filings defense counsel has made in the present case, Defendant appears to maintain satisfactory communication with his counsel. There is nothing to indicate defense counsel could not adequately represent Defendant’s interests in the United States going forward.”

In addition, Judge Hilton stresses that Virginia has an interest in resolving this dispute. The Court of Appeals for the Fourth Circuit found that Kurbanov had “plentiful” contracts with the state, noting that his sites collected data from more than 1.5 million visitors in the state.

Citing earlier jurisprudence, the court adds that Virginia also has an interest in ensuring that copyright law is properly enforced.

“Though the claims at issue in this case do not arise under Virginia law, Virginia maintains ‘an interest in ensuring that the nation’s copyright and trademark laws are not violated within its borders,’ lest the state become a safe haven for intellectual property infringement,” Judge Hilton writes.

Based on these arguments the motion to dismiss is denied. This means that after three years, the case is likely to move ahead on its merits.

The ruling is good news for the music companies, who will get their chance to defeat the YouTube rippers in court. However, based on how Kurbanov and his legal team have fought this case thus far, this could prove to be quite a challenge.