SceneTorrents: The Untold Story of Raids and Arrests

While sites like The Pirate Bay grab most of the headlines in the BitTorrent world, there is another thriving part of the eco-system which attracts much less attention. The Internet currently plays host to many hundreds, probably thousands, of so-called private BitTorrent trackers.

These sites usually require an invitation to become a part of and tend to be much more organized than their public counterparts. Not that public sites are disorganized as such, but with limited resources and means of generating funds for survival, admins on private sites tend to keep a relatively tight leash on members and content availability in order to keep their sites healthy.

One such site, SceneTorrents (ScT), had been working the private scene for nearly 4.5 years but on 27th November 2009, it all came crashing down. Filling an initial information vacuum in which rumor spread like wildfire, staff eventually said that the site would close forever, citing “pending legal issues.”

“Well ScT started in 2005 and apart from the odd take down request by Warner and a few others, things were plain sailing!” ex-owner of ScT ‘Feeling’ told TorrentFreak.

“Roll on 27th November 2009, the police turn up at my door at 6am – two detectives, a few police and a Proceeds of Crime officer.”

Of course, for those growing ever more familiar with anti-piracy enforcement in the UK – particularly those following the failed legal actions against TV-Links and FileSoup – the police were not on their own.

Along with the police came two investigators from FACT – the Hollywood-funded Federation Against Copyright Theft.

“The police handcuffed me and arrested me for copyright theft and money laundering,” Feeling told us.

“They then asked me to show them every room in the house before leading me off down my driveway and then into the back of a police van. In the mean time I see more FACT officers enter my home to search it while I was in the back of the van. At 6am in winter it is mighty cold, I can tell you that!”

Feeling was then driven a few miles to the nearest big police station where he was taken into custody and held in a cell. Several hours later his questioning began.

Led by a Detective Chief Inspector and joined by a Proceeds of Crime officer and one investigator from FACT, Feeling was accompanied by a duty solicitor.

“The police started off asking me about ScT, how long it had been running, my part in it and my knowledge of what was going on. They also questioned me about other sites I had no part in but they thought I did,” Feeling explained.

“The FACT guy sat there most of the time just listening, and he would chirp in now and then with his limited knowledge of BitTorrent and P2P.”

While Feeling notes that FACT had limited knowledge of what they were investigating, the police had even less idea.

“The police did not know a single thing about BitTorrent, P2P or anything else like that,” he explains. “I found it quiet disappointing that FACT had told the police that I was a major criminal to get them to arrest me and search my house.”

Convincing the police that file-sharing site operators are major criminals is a speciality of FACT – they have managed that in many cases already including TV-Links, FileSoup, SurfTheChannel and AradiTracker, to name a few.

Hunted down by Hollywood, with help from unlikely allies

The FACT officer present had a file in his possession which contained photographs of Feeling, but quite how they tracked Feeling down to his home address has never been revealed – he didn’t have his name or address on the site’s server bills or PayPal account.

However, TorrentFreak put it to Feeling that enemies of SceneTorrents were perhaps not to be found exclusively at the MPAA, but also in another ‘group’ a lot closer to home. From 2006 to 2009, the Warez Scene had waged an on/off campaign to compromise SceneTorrents and its staff. The information revealed by them, although it wouldn’t stand up in court as-is, would certainly have been welcomed by FACT. Some of it was incredibly sensitive.

Running a criminal case is no problem for Hollywood

“At the time of the arrest I thought it was the police that were running the whole thing, but I have later learned through the police telling me that it is FACT that are running the show and it is them who have my stuff up in Scotland,” Feeling explained.

At one point FACT, a private company, actually got involved in the interview.

“The FACT officer asked if I downloaded TV shows and if so, which ones?” Feeling told us. “I replied with ‘one or two’, and named Top Gear. He then went into a rant about stopping a DVD sale.”

Feeling asked the FACT guy about the free availability of these shows on the BBC iPlayer and how they may or may not affect DVD sales. “He didn’t say much after that,” he said.

Once the interview process was completed, Feeling was required to give a DNA sample and have his picture taken. He was then released on bail and given a date in February 2010 to return.

At home he discovered items had been taken by FACT – two Xboxes, a PC, portable hard drives, a phone, and even cash. Later that evening the phone and money were returned but Feeling was required to sign documents granting access to his bank accounts.

“After they had left I logged onto MSN on a friend’s PC and told djgrrr [a trusted staff member] to shut SceneTorrents all down,” Feeling explained. 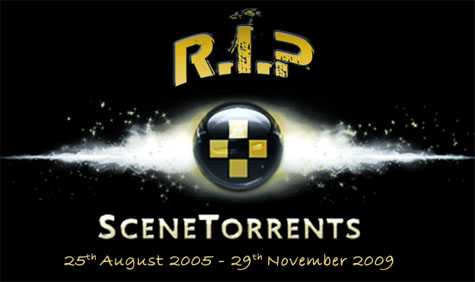 As in the FileSoup case, Feeling was not ordered by the police to close SceneTorrents. This enabled staff to post up a message and leave the forums open to give the members some information and allow them time to find new homes.

However, the fact that the site had remained up, at least partially, caused issues among some site members. ScT had just completed a donation drive to get money for new hardware and some felt that having successfully pulled in money, shutting down had always been the plan. Of course, Feeling would’ve liked to have set the record straight, but due to his serious legal position, he couldn’t do that at the time.

While Feeling was getting arrested, another ScT staff member was also suffering the same fate. Discussions between the pair ended in a shared conclusion – no more torrent sites. “It just wasn’t worth it anymore,” Feeling told us.

The endless wait for justice

Then in February, just two days before Feeling was due to answer his bail, the Detective Chief Inspector (DCI) handling the case contacted him. The police were still waiting for a response from the Crown Prosecution Service (CPS) on how to proceed and a new bail date was set for May 2010.

In May the same thing happened again, and a new date was fixed for July. But while July duly arrived, the same could not be said about a decision from the CPS. No new date was set and several months later Feeling was wondering what on earth was going on.

“Christmas 2010 came and I called the DCI to find out what is going on and what was taking so long,” he explained. “They told me they were waiting on advice from the CPS but it was nearly resolved and we would find out more information in the New Year.”

But then in March 2011, Feeling read an article on TorrentFreak about the mess surrounding the now-failed case against FileSoup, again with FACT at the helm.

With cases failing all around them, FACT don’t have a good record when it comes to successful file-sharing site prosecutions so Feeling’s lawyers are now pressing the police to get something done about these continuing delays.

TorrentFreak has learned that admins of another UK-based torrent site are in the same position as Feeling. We have a hunch who that could be, although we could not get that confirmed at this stage. When we have the news of the outcomes in both cases, we’ll post an update.

As reported briefly yesterday, FACT continue with their drive to close down UK-based file-sharing sites with the assistance of the police, but without a successful prosecution to their name despite many arrests, one wonders for how long this can continue.