There’s a very good chance that thousands of readers will already be familiar with the antics of one Mr. Joel Singer and his nemesis, Steve Heflin. Thousands will have forgotten. Thousands more will be hearing about this debacle for the first time.

The short story is easy to tell. In 2019, Steve Heflin was on business in Fort Lauderdale to interview a prospective employee with a view to hiring him as a new salesman for his Internet infrastructure company. During a visit to a local bar, Steve observed “two guys in suits” sitting at the bar, one of whom was Joel Singer.

According to Steve, Singer was drunk, and when the valet refused to return Mr. Singer’s keys, advising him to get an Uber instead, an altercation broke out. In short, Mr. Singer headbutted a restaurant worker in the face, Heflin took the assailant to the ground, and the whole thing was filmed by a third-party and ended up on YouTube.

So why would we be interested in this event? Well, someone later decided that this negative publicity needed to be erased from the Internet, from every nook and cranny, using copyright law. As previously reported, DMCA notices were liberally filed in an effort to remove every video, news article, report, and search result that referenced the event.

Of course, this campaign was totally counterproductive. After most people had consigned the event to their mental history books, here it was back in the news again, prompting yet more people to repost the video, start more social media threads about Mr. Singer, and relive the Internet drama all over again. And again…and again.

As per usual, the whole thing fizzled out but some people cannot let things rest.

We didn’t mention it at the time because the story was effectively done and Mr. Singer and his adventures were yesterday’s news. However, in July 2020, a number of sites – Reddit and TorrentFreak included – were targeted in another wave of DMCA notices and other copyright complaints (examples here)

These sought the removal of our article and various Reddit threads from Google but whoever sent them didn’t want to be identified, since they were sent under the name “.TEC.LAW.“, an entity that doesn’t appear to exist. Since Google appeared to be rejecting most of the notices, we let things slide and got on with more important things. Sadly, someone had other ideas.

As can be seen from this page on the Lumen Database, an entity identifying itself as “TECH LAW” began sending another wave of notices targeted hundreds upon hundreds of URLs that allegedly referenced the infamous attack back in the summer of 2019. According to many of the takedown requests, the reason for deletion is as follows (no errors corrected):

The photographs of the video of Joel Micheal Singer in restaurant URL below or “JoelMichaelSinger” is infringed by the text excerpted on the site, beginning with the text Joel Michael Singer assaults two innocent people at a store .” “Who is Joel Michael Singer?

To be clear, we have not checked every single URL for infringement. However, what we can confirm is that many of these URLs contain a photograph of Mr. Singer that someone, somewhere, holds the copyright to. The argument over whether other sites can or cannot repost that image in various contexts is a battle they can have with the copyright holder.

However, many of the links also lead to the video of the attack and it is yet to be established who owns the rights to that recording. Steve Heflin says that Mr. Singer could not have filmed it himself, since he had his face pressed into the floor. It is possible, of course, that Mr. Singer has since obtained exclusive rights to it. Maybe we’ll never know.

That being said, some things are much more clean-cut.

TorrentFreak is NOT Infringing Your Copyrights

This week, the Lumen Database published a new DMCA notice filed by a mysterious entity called TEKKLAWWZ.Z on behalf of the previously mentioned TECH LAW. It targets more than 70 URLs that allegedly contain a copyrighted image of Mr. Singer.

“Digital image. Property of TEKKLAWW not authorized for reuse or pecuniary gain. Headshot not authorized to be used by any third party,” the notice begins.

Again, some of the pages do indeed carry the image of Mr. Singer, potentially in breach of copyright. However, many do not, such as these negative ‘reviews‘ on BirdEye.com or this page on Urban Dictionary. 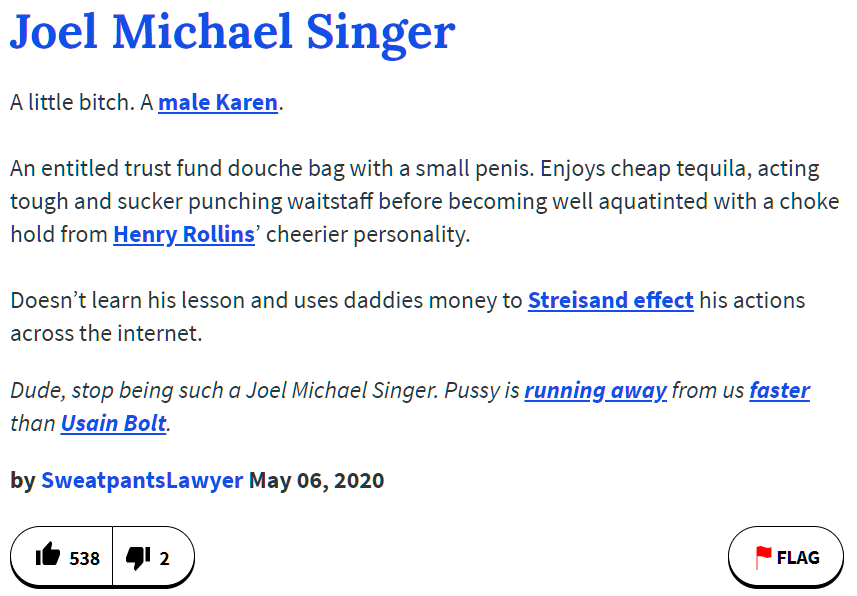 But of course, the takedown attempt we were most disappointed to learn of targeted the article published by TorrentFreak last summer. We have been targeted before so perhaps at this point, it’s best to put our cards on the table for absolute clarity.

Our article does not carry the ‘headshot’ of Mr. Singer and never did. The video of the altercation appears as a link to YouTube, which is required to support the text of the article. And, to be very specific, our original reporting did not even mention Mr. Singer by name.

So, in the likely event the notice senders still haven’t managed to connect the dots, perhaps we should spell it out: There is no copyright infringement here and there never has been.

This is what is known as an abuse of the DMCA and if there is something we are interested in reporting here at TF, it’s abuses of the DMCA. We sincerely hope we don’t have to do a follow-up, the Streisand Effect has had more than enough fuel on this topic.