‘Skidrow’ Pirates Get Pirated After Removing Their Own ‘DRM’

It’s very common for the entertainment industries to get their collective undergarments in a twist over piracy, so it makes an interesting change to see the same kinds of emotions spill over onto the other side of the piracy fence.

It all began a couple of weeks ago with the release of the Redlynx / Ubisoft motorcross game Trials Fusion. Released on all the top platforms mid April, the race was immediately on for a so-called ‘Scene’ group to remove its copy protection and release a pirated version. On April 16 the group ‘MoNGoLS’ released the game on XBox 360 and eight days later a group called ‘CODEX’ released the Windows version.

Scene records show that CODEX have only been around since February this year yet they managed to beat other leading groups on this particular release. Was that due to them being clever and working hard, or was there another explanation? According to one of the most famous cracking/piracy groups on the Internet, CODEX cheated their way to the win.

Skidrow is one of the most famous groups around and is responsible for the cracking and release of hundreds of games over the years. On April 27, three days after the CODEX release of Trials Fusion, Skidrow released their own version. Then, the day after, revealed why that had been necessary.

According to Skidrow, CODEX had – shock, horror – PIRATED Skidrow’s work.

“While looking inside their emulation code, we discovered something that was about to shock us completely,” Skidrow explained in an announcement this week.

“It was OUR work, OUR emulator.”

But how could Skidrow be so sure? Apparently the group employs rudimentary watermarking.

“CODEX must be stupid to think that we don’t mark our code, but we had it clean on our screens, that CODEX are thieves of our Ubisoft emu. 99 percent of all their API calls in the code are identical with ours.”

Just to be sure, Skidrow say they also plant “several stealth API calls, that identify and tag” their work. Those were apparently found inside CODEX emulation DLLs. For those who understand it, the proof is apparently revealed in the image below. 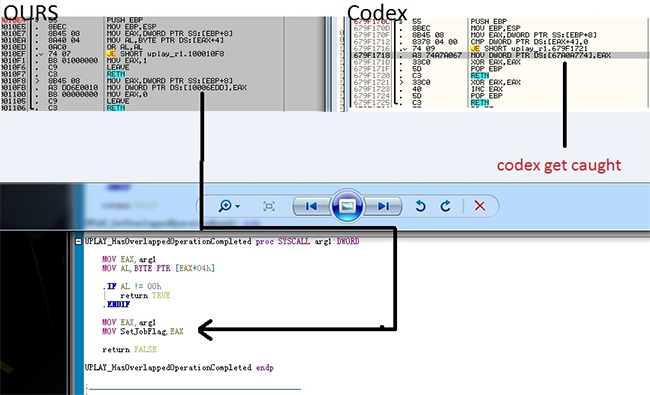 “[The image] shows the original function written by the coder, using a global variable for another function. Basically, the way the coder wrote the API to set the flag is unique, and [this is] simply copy and paste of our code by CODEX,” Skidrow say.

But while the irony of one group complaining about the pirating (or plagiarizing) of another’s work is pretty obvious, this week Skidrow revealed something else of interest. The group said that while previously it had taken measures to protect its cracks and emulators and obfuscate their code, it had decided to stop doing so when the code got in the way of enjoying the release.

“In the past we used to protect our creations, but lately we have found out that even the most functional [encryption] tools have certain limits when it comes to preventing them from stealing CPU resources,” Skidrow revealed.

“Furthermore we have noticed that some people that use our releases, sometimes have issues with our work being notified as dangerous, when they run them on machines with certain antivirus, spam, spyware programs etc. Therefore we have decided to let our work, which is OUR work, be as clean and direct as you can get it.”

So there you have it. Even the swarthiest of game pirates get upset when people “steal” their code, and not even leading experts in consumer DRM cracking can get their own ‘DRM’ working without negatively affecting the gaming experience. Intriguing indeed…..

Note: For clarity some of Skidrow’s English translation errors have been tidied up.