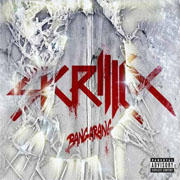 Today, on a Christmas morning with giving, kindness and sharing on our minds, we thank Sonny John Moore for his contribution to the holiday spirit.

These days Moore is better known as Skrillex, and since taking his current form in 2008 he’s been going from strength to strength. Last year he released his debut EP, My Name is Skrillex, as a free download and he hasn’t looked back.

He’s currently nominated for no less than six Grammys including Best New Artist, Best Dance Recording and Best Dance/Electronica Album. Everyone seems to love Skrill’ and today his fans will love him even more.

After delivering his much anticipated new album Bangarang this week, Skrillex reached out to fans both rich and poor, and trashed the mainstream recording industry mantra that “file-sharing is evil”.

“Happy holidays just like I promised,” said Skrillex on his Facebook page. “Just like I always say, go pirate it if you don’t have the money, I just want you to have it.”

“You can buy it here, either way i’ll love you,” he concludes.

Quite how long Skrillex will be able to deliver this crowd-pleasing attitude is unclear. He’s signed to Big Beat Records, an Atlantic Records subsidiary which in turn is owned by Warner Music. Hopefully, though, Skrillex will be left alone to do his thing, and here’s why he should be.

Modern electronic music, and by that I mean material from the last 25 years, has drawn its lifeblood from piracy. Sampling, cut-and-paste, mixtape and more recently file-sharing cultures have ensured that artists like Skrillex can hit the mainstream, gain a huge fanbase, get Grammy nominated and yet still give stuff away for free. And make money.

But perhaps more importantly in these turbulent times, this kind of approach gains the respect of fans, regardless of how deep their pockets are today. And tomorrow, one way or another, they will spend. If they actually enjoy doing that, the rest is easy.