Although they’ve been around for a decade or more, Russian music download sites still come as a surprise to those encountering them for the first time.

Apart from having some of the most extensive music libraries on the planet, they are ridiculously cheap. As the screenshot below of the current US #1 album from John Mayer shows, each track is being offered on the Russian site called ‘LegalSounds‘ for a little above give-away prices. A whole album costs just over a dollar. 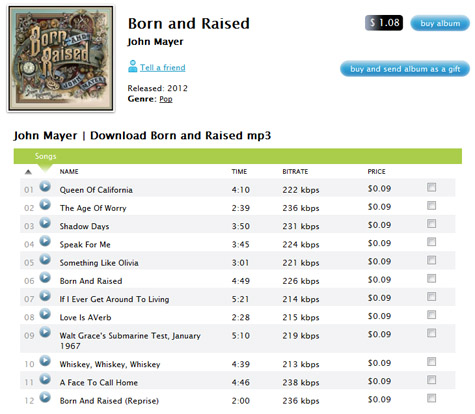 These music download sites are perhaps understandably a thorn in the side of the big record labels – when they offer a track for 9 cents they clearly aren’t playing by the same rules as iTunes for example.

These sites counter by maintaining that they operate legally under Russian law as they pay the necessary fees to a local collecting society.

For the purposes of this post we won’t concern ourselves too much with the legal issues, but rather where these sites are getting their music from. Something tells us it’s not coming from the labels, and here’s why.

When music is released unofficially online, audio filenames are formatted in a certain way.

The first part is the name of the artist, the second the title of the album, track or performance, the third denotes the source (in this case satellite – SAT), then the date, and the last section gives the name of the piracy group who released it online.

Of course, apart from the name of the artist and the album, none of these descriptors appear in music released on official sites – unless they’re Russian, that is. From searches done on some of these Russian music stores it’s absolutely clear that they’re ripping music from both torrent and Scene topsites.

The group 1KING shown in the random release above are well-known online for releasing unofficial rips of radio shows, yet bizarrely a few of their releases are available on sites such as LegalSounds.

So what about other terms associated with unofficial/pirate releases?

When a warez group release some music onto a topsite but fail to meet some Scene criteria by breaking rules, other groups can come along with a better version – a so-called ‘PROPER’. They put this word in the description of the track to show the fact. A search for this term on our trusty music site shows dozens of ‘PROPER’ releases. You won’t find those on iTunes.

The word ‘ADVANCE’, which could be used to denote an early leaked copy of an album, would only be used in an unauthorized track filename. Yet here are plenty of tracks, apparently advertising the face that they were being sold before they came out officially. Nearly as many appear if we search for the term ‘BOOTLEG‘.

But when it comes to selling music, even at rock-bottom prices, some of these sites will sell anyone’s, even when its normally free. They’re currently selling Dan Bull’s album ‘Safe’ in low quality 128Kbps, even though Dan gives it away to any fan. 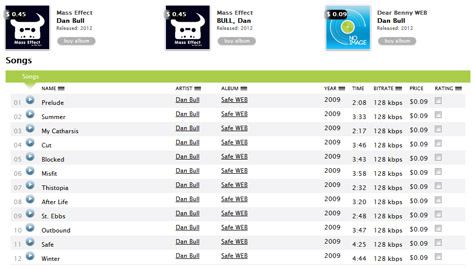 Other artists trying to build an audience by giving away stuff for free include Ophed on the Etched Trauma netlabel. They also found their music on Russian music sites with a price tag attached.

“I understand them selling Beatles or Springsteen but I wonder what on earth they were thinking ripping off a small Greek Netlabel and a Québécois artist,” the label said in a comment.

The answer is probably “they didn’t actually mean to,” as this very odd final example shows.

Without going into huge detail, Scene groups often ‘discuss’ things between each other via news releases on their topsite servers. These releases mostly take the form of short text (NFO) files, but every now and again they take a more unusual format.

In 2010, there were presumptions that a Scene release group called DV8 had changed their name to SiRE. It wasn’t true, they were different groups, but to highlight the fact someone took a music track by some random artist, gave it an interesting title, and released it on a Scene topsite to put the incorrect rumor to rest once and for all.

As can be seen from the screenshot from LegalSounds below, the message spread a little further than first expected – and it’s now worth 9 cents.

So, if LegalSounds paid the licensing fee for this release, who got the money?