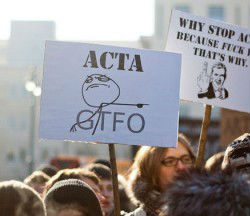 A trade agreement such as ACTA can only be enforced by a larger economy against a smaller, for two reasons. First, the preferred means of enforcement is trade embargoes or penalizing tariffs – and when one part enforces those against a mutual trade road, both economies suffer, but the smaller suffers more.

To take a real-world example, the United States’ embargo against Cuba hurt Cuba immensely, but barely the United States at all (save for the sudden absence of decent cigars). Also, Cuba would have been hurt just as much, if Cuba had initiated the trade embargo. A larger economy can hurt a smaller, but not the other way around.

The second reason is also the second method of enforcement, which would be military. A larger economy can ultimately impose its terms of trade on a smaller economy by the rattling of weapons, where the larger economy will have the resource advantage.

ACTA has been designed as a global treaty, and yet only two of the world’s three largest economies have been involved in its creation. China, #3, has been left out of negotiations – which is odd, given that ACTA is designed as an anti-counterfeiting agreement, and all of the countries known for counterfeit goods have been left out of the agreement. That leaves economies #1 and #2.

The ACTA agreement is primarily being pushed by trade representatives and industries in economy #2.

(The three largest economies of the world are, in descending order, the European Union, the United States, and China.)

As we have already seen, the world’s #2 economy – the United States – cannot impose its will on the world’s #1 economy – the European Union – through trade sanctions, and military action is politically and economically impossible. Therefore, if the European Union should choose to tell ACTA and its proponents to take a hike, it is effectively dead in the entire world, regardless of who else signs it in economy #4 or smaller. But if the US and EU were to agree voluntarily on this agreement, the combined economic power of the two largest economies will be plenty enough to bring everybody else in line.

There is exactly zero chance of the United States voluntarily backing out of ACTA, declaring it unconstitutional, ineffective, or whatever other negative term. Every legal body that would have had the compentence to do so – including Congress – have been kept out of the loop. This show goes down in the European Union.

Fortunately, nobody can keep this treaty from coming to a vote on the floor of the European Parliament, in the one elected body of the world’s largest economy. That happens some time in the parliamentary session of July 2-5.

No matter what you may have heard, ACTA is not dead. This beast is very much alive and for every cent us liberty activists spend on throwing it out, the corporations who want to own our culture and knowledge spend thousands on getting it passed. If you think you can sit back and relax now, those corporations couldn’t be better off – for they are moving in for the kill, lobbying-wise, as the final vote approaches in early July. If us activists consider the battle over, we will lose something that will take decades to repair once we’ve even started repairing it.

The good news is, that with the SOPA battle in the United States, we learned how to do this. We know that we can make a difference. When I spoke to the office of a Member of European Parliament (MEP) last week, they told me that one mail every other minute is practically a deafening torrent of citizens, impossible to avoid (unlike lobbyists). We know that 30 mails per minute – polite, honest, courteous, personal mails – is a pigshit number compared to what we can accomplish when we really get organized. Also, of course, we can (and should) call those MEP offices as the vote appears, in addition to mailing them.

We can win this. We know that we can win this. But we will not win it without fighting. We are only winning, barely winning, because of the demonstration of strength in the February 11 rallies. Now’s when we need to keep that up.

Last week ended well with three key committees recommending that the European Parliament reject ACTA as a whole. There are three votes left. The first is the vote in the Development Committee (DEVE) tomorrow (Monday), which will vote on whether ACTA adversely impacts third world health. Yeah, we know it does, but several bureaucrats are prepared to overlook that problem or whitewash it. It is our job to make them understand that we’re holding them accountable. You should let them know you care, whether you live in Europe or not.

That final, crucial vote happens some time in the July 2-5 parliament session in Strasbourg. That’s where ACTA lives or dies.

As the two next crucial votes approach, I’ll take the liberty to remind you here on TorrentFreak and on my own blog. For now, make sure to send a mail to those DEVE committee members!