Commissioned by the copyright TV industry group Alianza, research firm NetNames has just released a comprehensive report on the scope of online piracy in South America.

The study is a follow-up on the global “Sizing the Piracy Universe” report released two years ago. It combines data from various sources to estimate the local piracy landscape.

Analyzing data from Argentina, Brazil, Chile, Colombia, Ecuador, Peru, Paraguay, Uruguay and Venezuela, the report concludes that nearly half of the population has visited pirate sites or services in the period of a month.

“Of the approximately 222.3 million Internet users in South America, nearly 50%, or 110 million, accessed a site that distributed pirated audiovisual content by means of either a cyberlocker, peer-to-peer network or illegal IPTV streaming site,” the report reads.

Contrary to the worldwide picture, direct download sites receive more visitors and generate more bandwidth than peer-to-peer sharing such as BitTorrent. This may in part be due to lower Internet speeds, which are not optimal for P2P transfers.

Per year cyberlocker traffic accounts for more than half of all piracy traffic, 442 petabytes, compared to 265 petabytes of peer-to-peer traffic. NetNames also includes data for pirated live IPTV broadcasts, which adds another 82 petabytes.

In total the South American piracy landscape generates 789 petabytes per year. Or put differently, a whopping 2.3 million gigabytes per day. 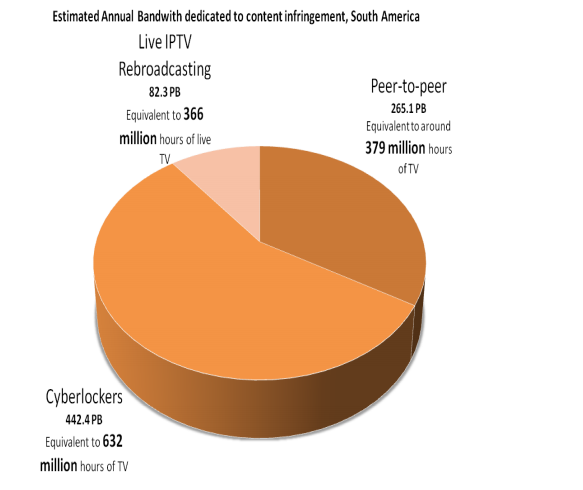 While these bandwidth numbers may look impressive they pale in comparison to other regions. For example, NetNames previously found that piracy accounted for roughly 20,000 petabytes of bandwidth per year in North America, and a massive 26,000 petabytes in Europe.

NetNames notes that it is nonetheless a considerable proportion, since the local Internet infrastructure is underdeveloped, and warns that copyright holders may face even higher levels of piracy if Internet penetration and speeds increase.

The report is expected to serve as an important lobbying tool to convince local lawmakers to take steps to prevent copyright infringement. Michael Hartman, Senior Vice President of DIRECTV Latin America, believes it is key to raise awareness.

“This is the first step necessary to raise awareness of the problem. It will enable Alianza members to educate others about the problem and develop strategies to combat this form of piracy.”

The full NetNames report is available on the Alianza website.