Piracy presents a major challenge for copyright holders across different sectors, including the sports industry.

While it’s easy to condemn piracy in its entirety, this may not be the best approach. Most pirates are legitimate customers too. In fact, they are often the biggest fans.

In recent years this realization has triggered a shift in perception. Instead of treating all pirates alike, it may be more sensible to look at their underlying motivations to access content illegally. That can help to find out if there are opportunities to convert some pirates into paying customers.

This thinking is also reflected in a new research report published by Synamedia. Through an extensive survey of over 6,000 respondents in ten countries, the company identifies different types of pirates, including those who are more likely to pay for legal services.

The overall conclusion is that with the right approach, the sports industry could potentially generate an additional $28 billion in annual revenue. While this is an estimate that depends on the most ideal scenario, the research makes some excellent points.

Instead of simply counting the potential revenue all pirates could bring in, Synamedia ignores the hardcore pirates. This represents roughly a quarter of all illegal viewers, those who won’t consider switching to legal services.

“We ignore the quarter of illegal viewers who will never pay for content — those that are only casually interested in sports, lack the means to pay, or those who are die-hard rebels. There is little point in measuring ‘lost revenue’ that could never have existed in the first place,” the report reads.

“This leaves a significant cohort of fans, 74% of all viewers of illegal sports services, as members of the ‘converter cohort’ —those consumers potentially willing to convert if they can access a legitimate alternative to the pirate services, and if industry action renders their illegal streams unreliable or unavailable.”

Instead of targeting all pirates at once, rightsholders should tailor their strategies to the group of potential converts. The research found that these tend to be younger and watch a wide range of sports using various connected devices.

Demograhphics of the Converts Group 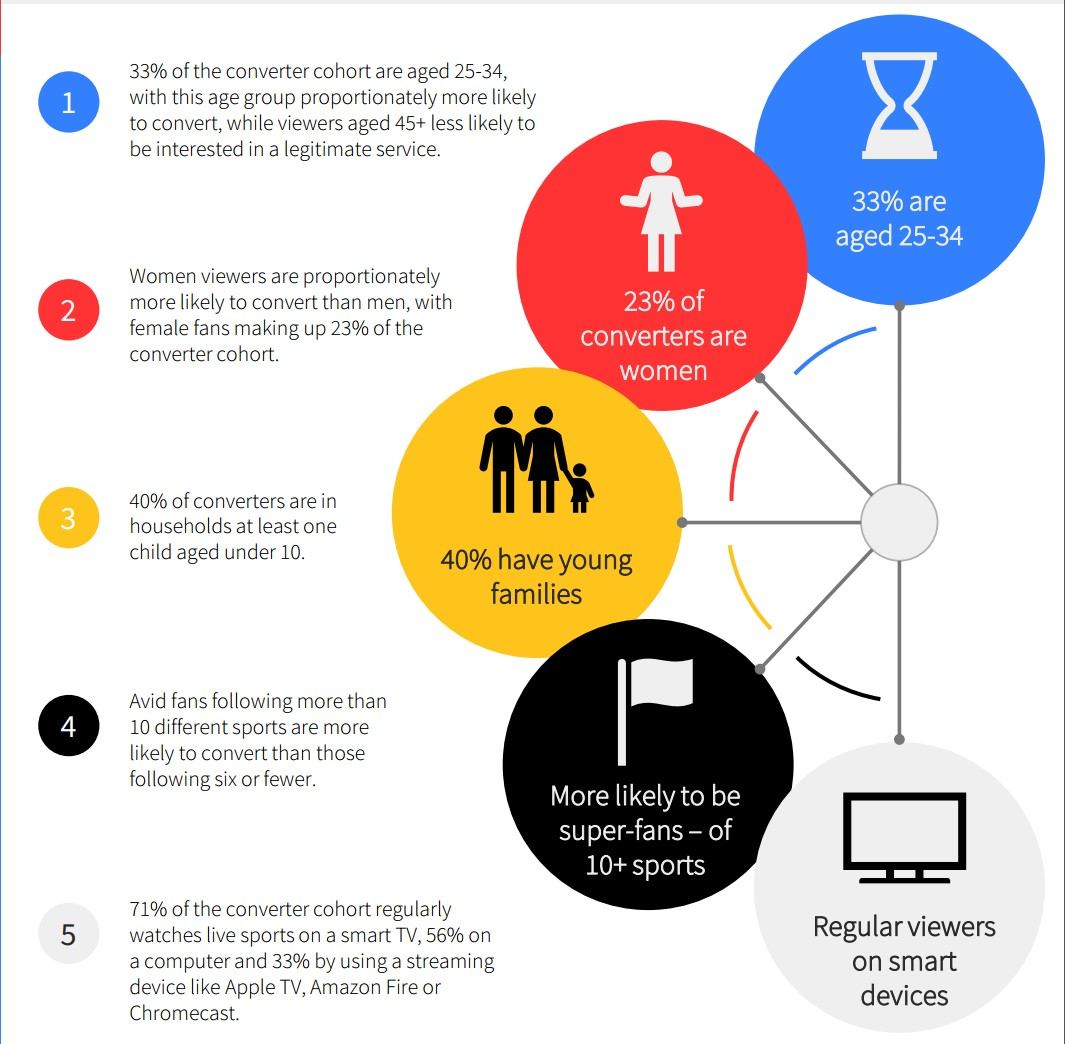 By carefully analyzing the demands of these potential converts, broadcasters could more easily convert them. For example, this ‘hyperconnected’ group tends to watch more content on devices away from the regular TV screen, a feature broadcasters should support.

“These hyperconnected fans are over-represented in the converter cohort,” the report reads. “This highlights the crucial need for operators to offer apps and ‘TV Everywhere’ access to ensure sports fans can watch on every screen, including when they are traveling away from home.”

Similarly, the potential converts are also more likely to be interested in niche sports. This means that broadcasters and platforms should offer a broad range of sports, instead of just focusing on what’s most popular.

In addition to looking at the features pirates are after, the sports industry can also focus on the regions where they stand to benefit the most. For example, Asia Pacific and North America together are already good for more than half of the conversion potential.

Finally, rightsholders can also tailor their anti-piracy measures to the ‘converts’ group. Among other things, the research found that these people are more concerned with unreliable or poor quality streams. So, cutting off illegal streams mid-game may be a good strategy.

Pirates are An Opportunity

The overall conclusion of the study is that pirates should be seen as an opportunity rather than a threat. This means that superior and affordable legal options combined with selective anti-piracy measures should work best.

“The hardcore unconvertible pirates should not be ignored, but focusing on the lucrative converter cohort makes far more business sense for the industry. And any deterrent initiatives aimed at nudging converters in the right direction will also help disrupt access for those with no intention of paying legitimate providers.

“The biggest consumers of illegal content are the most avid sports fans. Rights holders benefit from better engagement with their biggest fans when they’re serving up high-quality legitimate content,” the report adds.