Last month TorrentFreak reported on a script which mashes-up Spotify and YouTube and enables anyone to set up a decent free music service with a minimum of fuss.

“Youtubify allows you to create your own music streaming website in minutes with no coding knowledge,” the script’s sales pitch reads. “It has an impressive feature set that rivals and even surpasses other biggest streaming services on the market.”

At a cost of just $38 YouTubify has already been deployed on dozens of sites but it seems that the road ahead might not be as smooth as first anticipated.

TorrentFreak has learned that the operator of “Syotify“, a site using the YouTubify script, has just been contacted by Spotify’s legal team. 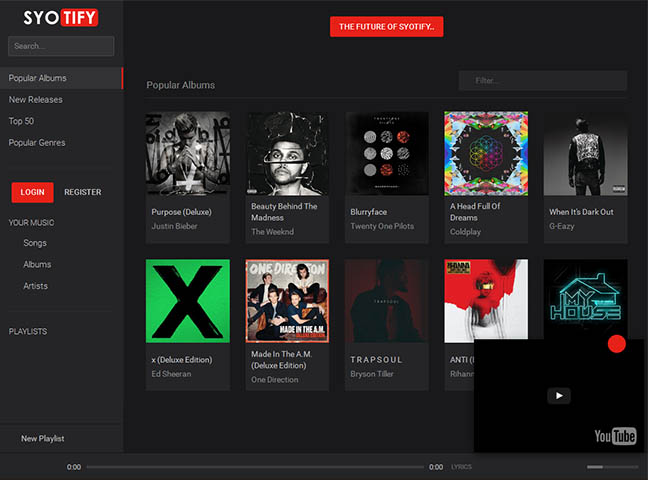 “Spotify has recently discovered that some of the things that you do violate Spotify’s intellectual property and other rights,” Spotify told the site.

“Spotify is all for you making a living and running a business, but when that business interferes with Spotify’s rights, we hope you understand that Spotify can’t just sit back and take no action.”

Spotify begins by making it clear that the domain name ‘Syotify’ is too close to its own trademark and as a result is likely to mislead Spotify’s customers.

“Your registration and use of the Infringing Domain Name and your unauthorized use of the Spotify Marks is likely to confuse people into thinking that your website (including its domain name) is somehow associated with or approved by Spotify,” the letter continues.

“Unfortunately, no reasonable explanation exists for your registration of the Infringing Domain Name and use of the Spotify Marks other than the bad-faith intent to profit from the goodwill associated with the Spotify Marks.”

While it initially appears that Spotify is mostly concerned about its trademarks, a closer examination of the cease-and-desist sent to Syotify reveals a fundamental problem with how third-party services leverage Spotify’s API.

“[Y]our website offers the service of converting Spotify’s streaming music service to create playlists on YouTube in violation of Spotify’s user agreement. Essentially you use the Spotify Marks to promote a competitive website that, at the least, appears to generate revenue from third-party advertising,” Spotify writes.

Noting that Syotify’s website breaches trademark, cybersquatting and copyright infringement laws, Spotify gives the site just ten days to comply with a list of demands including:

But while most of the above relates to alleged trademark-style infringements, the final demand from Spotify indicates that the company will not allow the use of its API to power what amounts to a rival service.

Also of interest is that the cease and desist letter referenced above was actually sent to Cloudflare, who passed it on to Syotify as required. However, Spotify also calls on Cloudflare to take action against the music service.

“We assume that you respect the intellectual property rights of others and therefore request that CloudFare remove the infringing content,” Spotify writes.

There’s no indication that Cloudflare intends to do so but TF understands that the company has forwarded the details of Syotify’s hosting provider to Spotify and also forwarded the complaint, so dealing with the site at source is now an option.

Speaking with TorrentFreak, the owner of Syotify says that he was written to Spotify to acknowledge receipt of the company’s complaint but has not yet decided how to respond.

It’s possible that he may move to a new domain to stop infringing on Spotify’s trademarks but he’s not prepared to hand any domains over to Spotify. There is also the chance of him transitioning from a Spotify-powered site to one using Last FM, but nothing has been decided yet.

At the time of publication Spotify had not responded to our request for comment.