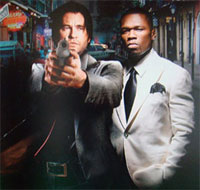 Produced by Nu Image/Millennium Films, Streets of Blood is scheduled for a straight to DVD-release at the end of July. However, already 500,000 BitTorrent users have added the film to their collection.

Despite its early release the film’s reception hasn’t been very positive. Some claim that the film is a waste of disk space while others complained about the mumbling and acting performance of 50 Cent.

Nevertheless, the film made it into our list of the 10 most downloaded movies on BitTorrent this week. ‘Watchmen’ tops the chart this week followed by ‘Knowing’ and ‘Streets of Blood’.

The data for our weekly download chart is collected by TorrentFreak and is for informational and educational reference only. All the movies in the list are DVDrips unless stated otherwise.