About a week ago we reported that The Pirate Bay’s upload functionality was broken.

While this problem was eventually solved after a few days, the regular domain became unusable soon after.

Today, more than five days later, the problem persists. For most people, the site currently displays a CloudFlare error message across the entire site, with the CDN provider mentioning that a “bad gateway” is causing the issue.

No further details are available to us and there is no known ETA for the site’s full return. However, judging from past experience, it’s likely some technical issue that needs fixing. 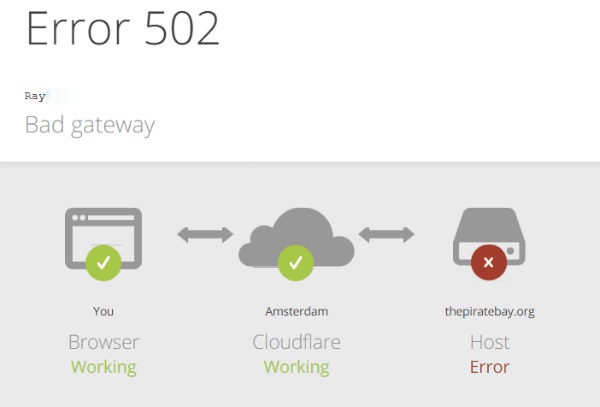 The Pirate Bay has had quite a few stints of downtime in recent months, and by now it’s becoming a regular occurrence. While more than five days is a new record, aside from the 2014 ‘raid,’ there’s no news to report.

The moderators in the official forums don’t appear to have any information on the ongoing issues either. They do point out, however, that the site is not down completely.

TPB is still available via its .onion address on the Tor network, accessible using the popular Tor Browser, for example. The site’s Tor traffic goes through a separate server and works just fine.

The Pirate Bay team has a status page in the forums where people can check to see if an outage is affecting everyone or not. This also shows that the Tor version of the site is working fine. At least, at the time of writing.