The Tunnel Inks Distribution Deal With BitTorrent Inc and VODO 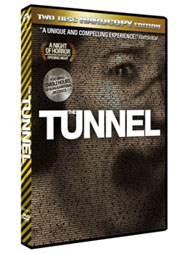 It’s been a busy year for Distracted Media’s Enzo Tedeschi and Julian Harvey.

Since mid-2010 they been trying to raise both funding and awareness for their upcoming horror movie, The Tunnel. In both respects, but especially the latter, they have achieved their aims with a very impressive marketing campaign.

While The Tunnel itself may be set deep underground in a network of real-life tunnels under Sydney, Australia, it will be on terra firma in the digital tunnels of the Internet that it will realize its distribution aims.

TorrentFreak can today confirm that following the inking of a physical DVD distribution deal with Transmission Films and Paramount Home Entertainment, Enzo and Julian have reached online distribution agreements with both BitTorrent Inc. and VODO, the platform created by Steal This Film creator Jamie King.

“We are really excited about our partnership with BitTorrent and their ongoing support of independent artists,” said co-producers and writers Enzo Tedeschi and Julian Harvey.

“The BitTorrent technology provides a direct connection to a massive audience all around the globe. It is a definitely a new and exciting distribution path for independent filmmakers who have a story that they want people to see.”

For VODO, The Tunnel will be the latest in a growing line of TV and movie success stories which include Pioneer One and Zenith.

“VODO is delighted to be partnering with BitTorrent to distribute this film, which was not only crowdfunded, but designed for P2P release,” VODO founder Jamie King told TorrentFreak.

“We’re seeing more and more filmmakers looking to P2P distribution to reach their audiences as we build on the successes of The Yes Men, Pioneer One and Zenith. The whole team is behind the release and we’re hoping to make it a big success.”

The Tunnel will receive its BitTorrent debut on May 19th via BitTorrent.com, uTorrent.com and Vodo.net. After the masses of hype, it better be good.