Late April, a hacking group calling itself TheDarkOverlord (TDO) warned that unless a ransom was paid, it would begin leaking a trove of unreleased TV shows and movies.

Almost immediately it carried through with its threat by leaking the season five premiere of Netflix’s Orange is The New Black. The leak was just the start though, with another nine episodes quickly following. Netflix had clearly refused to pay any ransom.

Ever since there have been suggestions that TDO could leak additional material. It was previously established that the Orange is the New Black leak was the result of a breach at post-production studio Larson Studios. TDO previously indicated that it had more content up its sleeve from the same location.

During the past few hours that became evident when a message sent to TF heralded a new leak of yet another unaired show.

TDO refused to confirm where it had obtained the content but since the show was present in an earlier list distributed by TDO, it seems possible if not probable that the episodes were also obtained from Larson.

“We’re unwilling to discuss the source of this material, but we’ll go on the record stating that this is content that is owned by American Broadcasting Company and it’s just been released on the world wide web for everyone’s consumption,” TDO said.

As can be seen from the image below, the series is now being distributed on The Pirate Bay. 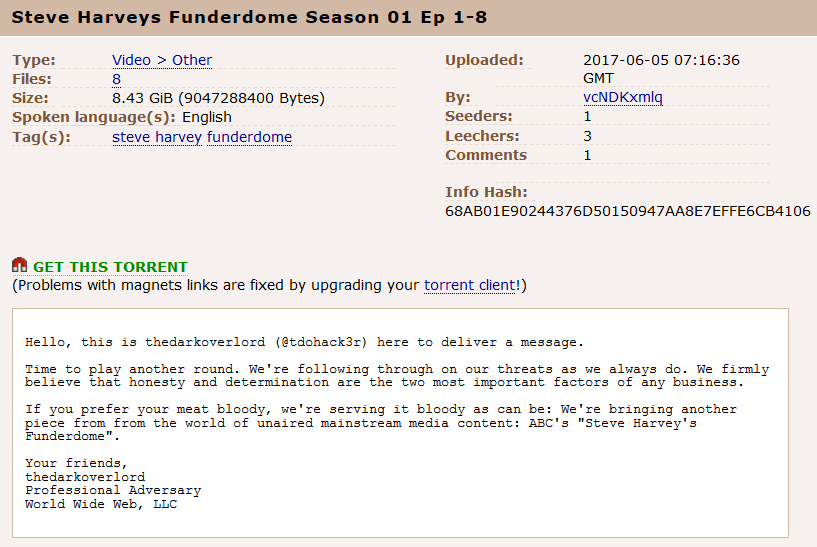 At the time of writing, interest in the episodes is low, with less than a dozen peers reported on the torrent. Those numbers are likely to increase as the day goes on but it’s safe to say that interest is at a much lower level than when Orange is the New Black was dumped online.

Interest levels aside, the reason that both series were leaked appears to be the same. Although TDO wouldn’t go into specifics, the hacking entity told TF that it contacted ABC with demands but had no success.

“We approached ABC with a most handsome business proposal, but we were so rudely denied an audience. Therefore, we decided to bestow a gift upon the good people of the internet,” TDO said.

On June 2, TDO already indicated that ABC could be the next target with a short announcement on Twitter. “American Broadcasting Company may be up next, ladies and gentlemen,” TDO wrote.

Interestingly, there’s a suggestion that TDO views the Netflix and ABC leaks as being different, in that it views the companies’ routes to market as dissimilar.

“This is a different model than Netflix as ABC’s profits are generated much differently,” TDO concludes.