While the popularity of torrent sites isn’t as strong as it used to be, dozens of millions of people use them on a daily basis.

Content availability is rich and the majority of the main movie, TV show, game and software releases appear on them within minutes, offering speedy and convenient downloads. Nevertheless, things don’t always go as smoothly as people might like.

Over the past couple of days that became evident to visitors of TorrentDownloads, one of the Internet’s most popular torrent sites.

Instead of viewing the rather comprehensive torrent index that made the Top 10 Most Popular Torrent Site lists in 2016 and 2017, visitors receive a warning.

“Attackers on torrentdownloads.me may trick you into doing something dangerous like installing software or revealing your personal information (for example, passwords, phone numbers or credit cards),” Chrome users are warned.

“Google Safe Browsing recently detected phishing on torrentdownloads.me. Phishing sites pretend to be other websites to trick you.” 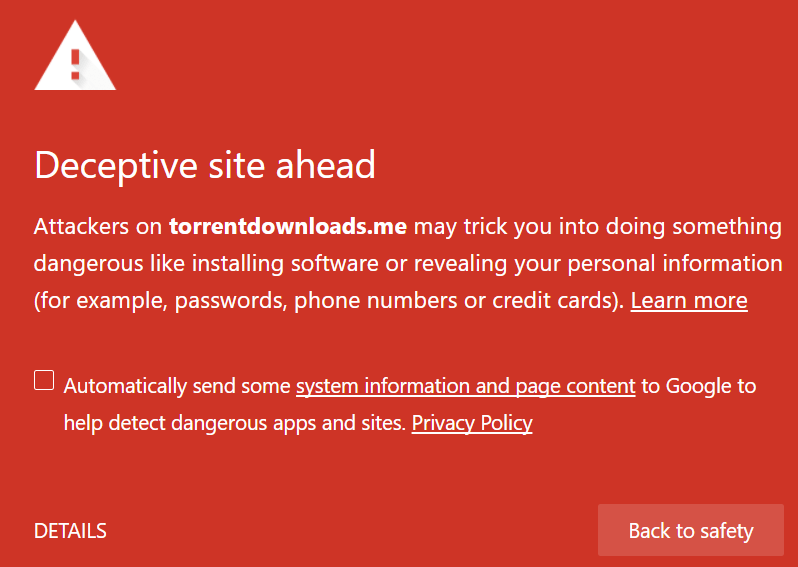 “This web page at torrentdownloads.me has been reported as a deceptive site and has been blocked based on your security preferences,” the browser warns.

“Deceptive sites are designed to trick you into doing something dangerous, like installing software, or revealing your personal information, like passwords, phone numbers or credit cards.”

A deeper check on Google’s malware advisory service echoes the same information, noting that the site contains “harmful content” that may “trick visitors into sharing personal info or downloading software.” Checks carried out with MalwareBytes reveal that service blocking the domain too.

TorrentFreak spoke with the operator of TorrentDownloads who told us that the warnings had been triggered by a rogue advertiser which was immediately removed from the site.

“We have already requested a review with Google Webmaster after we removed an old affiliates advertiser and changed the links on the site,” he explained.

“In Google Webmaster they state that the request will be processed within 72 Hours, so I think it will be reviewed today when 72 hours are completed.”

This statement suggests that the site itself wasn’t the direct culprit, but ads hosted elsewhere. That being said, these kinds of warnings look very scary to visitors and sites have to take responsibility, so completely expelling the bad player from the platform was the correct choice. Nevertheless, people shouldn’t be too surprised at the appearance of suspect ads.

Many top torrent sites have suffered from similar warnings, including The Pirate Bay and KickassTorrents, which are often a product of anti-piracy efforts from the entertainment industries.

In the past, torrent and streaming sites could display ads from top-tier providers with few problems. However, in recent years, the so-called “follow the money” anti-piracy tactic has forced the majority away from pirate sites, meaning they now have to do business with ad networks that may not always be as tidy as one might hope.

While these warnings are the very last thing the sites in question want (they’re hardly good for increasing visitor numbers), they’re a gift to entertainment industry groups.

At the same time as the industries are forcing decent ads away, these alerts provide a great opportunity to warn users about the potential problems left behind as a result. A loose analogy might be deliberately cutting off beer supply to an unlicensed bar then warning people not to go there because the homebrew sucks. It some cases it can be true, but it’s a problem only being exacerbated by industry tactics.

It’s worth noting that no warnings are received by visitors to TorrentDownloads using Android devices, meaning that desktop users were probably the only people at risk. In any event, it’s expected that the warnings will disappear during the next day, so the immediate problems will be over. As far as TF is informed, the offending ads were removed days ago.

That appears to be backed up by checks carried out on a number of other malware scanning services. Norton, Opera, SiteAdvisor, Spamhaus, Yandex and ESET all declare the site to be clean.

Technical Chrome and Firefox users who are familiar with these types of warnings can take steps (Chrome, FF) to bypass the blocks, if they really must.

Update Nov 10: TorrentDownloads’ operator informs TF that Google has kept the block in place, even after he removed what was believed to be the offending advertiser. To be certain of clearance quickly, all affiliate links are now being removed from the platform.