During this time, many torrent sites have shut down, either voluntarily or after being forced to by a court order.

However, never before have we witnessed events like those of recent weeks.

On July 20, KickassTorrents (KAT), the largest torrent site at the time, was shut down after its alleged owner was arrested. A few days later Torrentz said farewell, leaving many more without access to their torrent search engine of choice.

Just like that, two of the largest torrent sites had disappeared, causing much confusion and uncertainty among former users. Both sites had millions of daily visitors who needed to find a new home.

Now that the dust has settled a bit we take a look at the massive migration that took place.

First off, the search for alternative torrent sites is nicely illustrated by Google Trends. Immediately after KAT shut down, searches for “torrent sites” shot through the roof, as seen below. 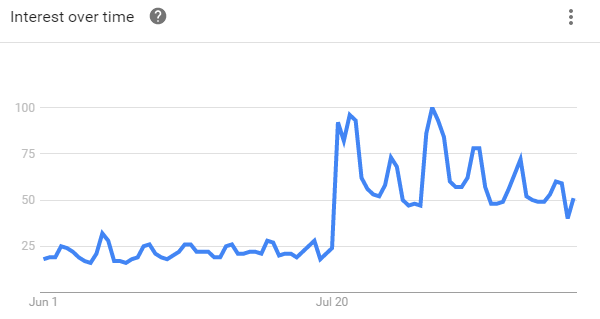 While many sites across the board are ‘profiting’ from the shutdowns, most traffic appears to be going to the big players. The Pirate Bay, for example, which recently became the largest torrent site again, as well as runner-up ExtraTorrent.

To get a representative picture of changes we asked Similarweb for an overview of the traffic that flowed to the top five torrent sites over the past months, plus Torrentz. The data is taken from a sample of over 200 million devices measuring desktop visits only.

The graph below shows that traffic to all sites went up after Kat.cr was taken offline. Torrentz initially saw a sharp rise as well, but traffic tanked after its farewell message early August. 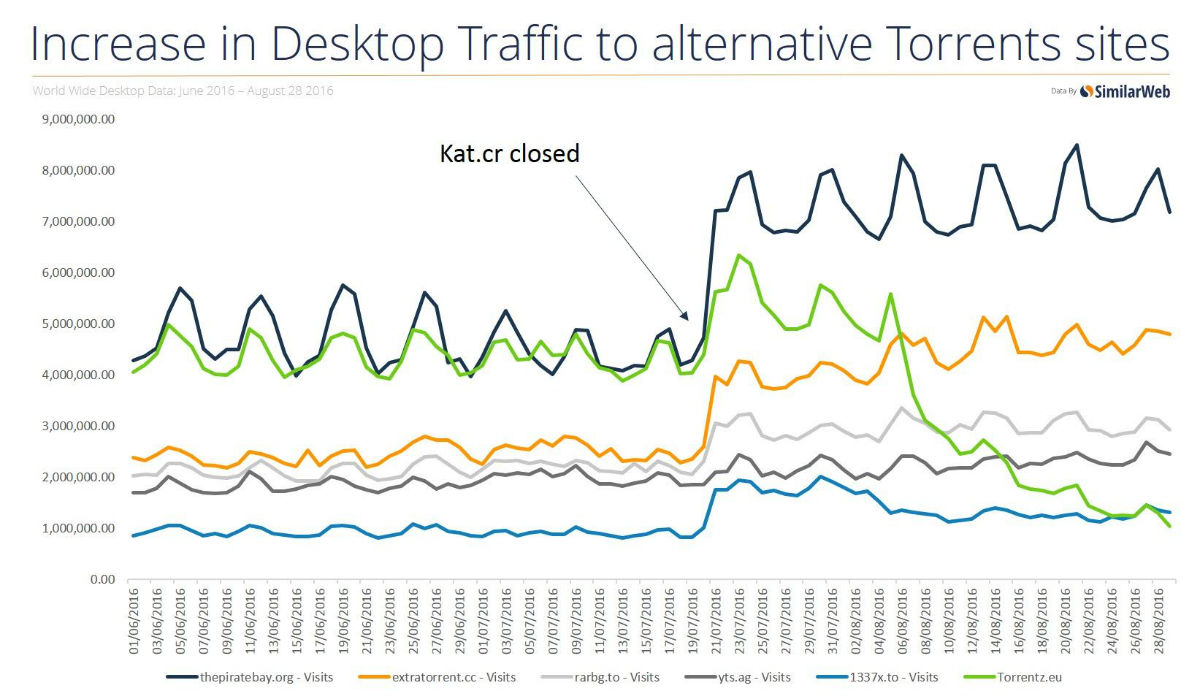 In absolute terms The Pirate Bay benefited the most, adding several million daily visitors, with a relative increase of 67%. ExtraTorrent, however, doubled its numbers with a 101% increase, welcoming a lot of new users after the Torrentz shutdown.

The three other sites in the top five, RARBG, 1337x.to and YTS.ag, saw their visitor numbers go up by 45%, 53% and 44% respectively. Still good hundreds of thousands of extra visitors per day, according to the reported data.

The Pirate Bay team previously told us that they are happy to welcome these new users, which made it the king of torrents once again. Similarly, ExtraTorrent is also motivated to keep expanding.

“We always think and dream of growing and we indeed plan to keep growing,” ExtraTorrent’s SaM tells TorrentFreak, adding that the members of the site make it a success.

Aside from the big players, several smaller sites also saw their traffic rise. Initially, a lot of interest went out to ‘mirrors’ and copies of KAT and Torrentz, some of which are still doing very well traffic-wise.

Torrentz2, for example, greatly benefited from coverage in the Indian press. While the site is not that popular in the West, in India it quickly became one of the largest sites in the country with Alexa ranking it in 127th place locally.

Interestingly, however, there are also several torrent sites that have been ‘hurt’ by the recent takedown of Torrentz. As thelargest torrent meta-search, Torrentz sent traffic to a lot of ‘smaller’ sites, traffic that has now disappeared.

Torlock, for example, initially saw an increase when KAT went offline but after Torrentz folded their traffic tanked. The site currently has half the users it had two months ago.

“After KAT we saw a massive increase but I assume that was because Torrentz received much more traffic when KAT went down,” Torlock’s operator tells TF.

“Because we were very reliant on Torrentz when it shut down, it basically halved our traffic. So currently we are half of where we were before KAT and Torrentz shut down.”

With millions of people moving to new sites, it’s safe to say that the torrent ‘community’ is in turmoil, trying to find a new status quo. Whether the shutdowns will actually lead to fewer people using torrents is unclear though. Thus far we have not seen any evidence that this is the case.