Entertainment industry groups including the RIAA and MPAA view BitTorrent sites as a major threat. The owners of most BitTorrent sites, however, believe they do nothing wrong.

While it’s common knowledge that The Pirate Bay refuses to remove any torrents, all of the other major BitTorrent sites do honor DMCA-style takedown requests.

Several copyright holders make use of these takedown services to remove infringing content, resulting in tens of thousands of takedown requests per month.

Bitsnoop is one of the prime targets. The site boasts one of the largest torrent databases on the Internet, more than 24 million files in total. This number could have been higher though, as the site has complied with 2,220,099 takedown requests over the years.

The overview below shows that most of the takedown notices received by Bitsnoop were sent by Remove Your Media. Other prominent names such as the RIAA and Microsoft also appear in the list of top senders. 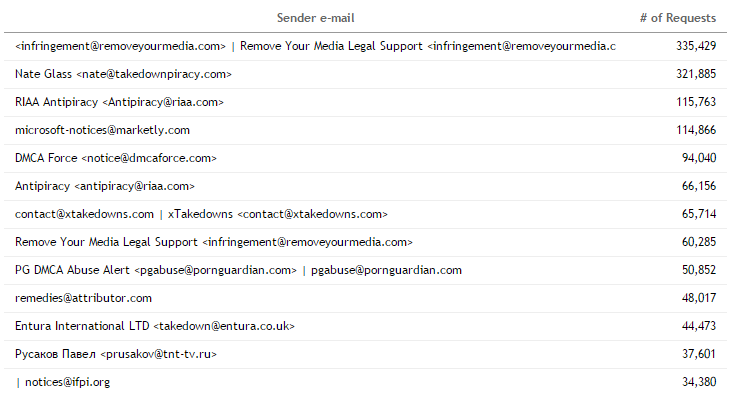 As one of the largest torrent sites, KickassTorrents (KAT) is also frequently contacted by copyright holders.

The site doesn’t list as many torrents as Bitsnoop does, but with tens of thousands of takedown notices per month it receives its fair share of takedown requests.

The KAT team informs TF that they removed 26,060 torrents over the past month, and a total of 856,463 since they started counting.

Torrent sites are not the only ones targeted. Copyright holders also ask Google to indirectly remove access to infringing torrents that appear in its search results. Interestingly, Google receives more requests for Bitsnoop and KAT than the sites themselves do.

Google’s transparency report currently lists 3,902,882 Bitsnoop URLs and several million for KickassTorrents’ most recent domain names. The people at TorrentTags noticed this as well and recently published some additional insights from their own database.

Despite the proper takedown policies it’s hard for torrent sites to escape criticism. On the one hand users complain that their torrents are vanishing. On the other, copyright holders are not happy with the constant stream of newly uploaded torrents.

Not all torrent sites are happy with the takedown procedure either. ExtraTorrent doesn’t keep track of the number of takedown requests the site receives, but the operator informs TF that many contain errors or include links that point to different domains.

Still, most torrent sites feel obligated to accept takedown notices and will continue to do so in order to avoid further trouble.