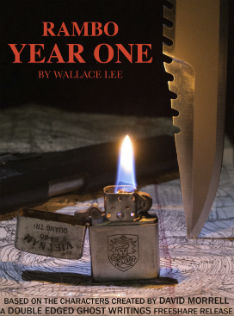 In this day and age, aspiring artists have access to a wide variety of tools they can use to create a decent product.

Creating something is easy, but the real challenge is to escape obscurity and get noticed by the public.

Traditionally, this task has been fulfilled by major publishers and other media distributors, but there are also alternative routes.

The stories of YouTube sensations who turned into their own media empires come to mind. But in darker corners of the web, which are mostly associated with piracy, there are success stories too.

This week we spoke to Italian author Wallace Lee, whose unofficial Rambo-prequel “Rambo Year One” received great reviews after relying on torrents as a main distribution channel.

Lee’s story starts several years ago, when he began publishing short Rambo stories on a personal blog hosted by WordPress. It was fan-fiction in its purest form, but the author soon realized that not everyone was happy with his work.

“Two years before free-sharing my first novel, I had a blog where I used to post my Rambo prequel short tales for free. And yet, a few months later, my site was shut down because the laws in the US allow copyright owners to stop fanfiction too, and even if it’s just for free.”

It turned out that a rightsholder objected to his use of the Rambo character. While Lee doesn’t recall the sender of the notice, it meant that he could no longer publish his work as he pleased.

Caught in a copyright stranglehold, the author felt limited in his creative expression. Ironically, he saw torrents as his way out. If he published his works on The Pirate Bay, copyright holders couldn’t touch him, he thought.

It was a defiant thought, which may have worked, but luckily for him, it didn’t get that far. Instead of becoming a ‘pirate writer,’ Lee received permission from David Morrell, author of the novel “First Blood” on which the Rambo empire was built.

“Frankly, I feel very lucky things ended up this way because I did not want to be at war with the same guys who owned Rambo in the first place,” Lee tells TorrentFreak.

With permission to freely share his book, the unofficial Rambo-prequel was finally released. While Lee no longer had to turn to piracy, he was still committed to using torrent sites to get exposure and escape obscurity.

That worked to a certain degree. The book was picked up here and there, but without a major publisher, it was hard to be taken seriously by literary critics.

“The prejudice was extremely harsh and lasted for a very long time. For one whole year at least, I was just ‘the crazy guy who was writing a Rambo-prequel saga for nothing’,” Lee says.

That changed when the author started to point people toward the historical accuracy of the book, which has the Vietnam war as the backdrop, and using that as one of the main selling points.

“Everyone was astonished by the idea that a Rambo prequel aspired to be a good historical novel too, and that was when important people decided to finally give me a chance. And when they did, they were pleased.”

This eventually led to more and more positive reviews, including a reading recommendation from the Calvino literary awards in Italy.

Looking back, Lee doesn’t think he would have come this far without torrents. They helped, not only to keep distribution costs low, but also to make his work visible to an audience of millions.

“Torrents helped a lot, and they’re still doing so in terms of distribution. Distribution is the most important part of the success of ANY artwork: books, music, films, everything,” Lee tells us.

“Torrents solved the problem by making my work worldwide both visible and available at the same time. Without the torrents, thousands of people in the world would have never found my websites and novels on the internet.”

Now, a few years later, the book has been translated by fans into two more languages, German and Spanish. They are all available for free in Epub, Mobi, and Pdf format, and the author uploaded new torrents on several sites just last week. 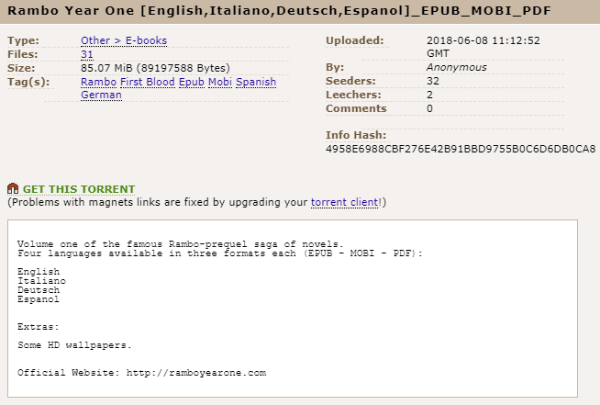 In addition to public sites such as The Pirate Bay, 1337X and Ettv, Lee also uploaded the release to the Italian private tracker TNT Village, which helped him a lot over the years.

Looking back, the whole experience has been a great success. In addition to getting recognized internationally as an Italian author, he is now in talks with several publishing companies to publish his non-Rambo novels.

Lee currently accepts donations on his site, where people can also find his other novels, for free. He never made a penny from the Rambo-prequel though, and never intended to. What he got instead was worth much more than that.

“Receiving words of appreciation from actual US veterans of the wars in Afghanistan and Iraq for your Rambo-prequel novels, has no price,” Lee says.