TorrentSpy Traffic Plunges After US Ban

TorrentSpy founder Justin told TorrentFreak in a response to the censorship: “Whatever future awaits, the innovations of peer-to-peer technology and the jobs and opportunities it creates will take place outside of the USA.”

Although it is relatively easy for US users to access TorrentSpy through proxies such as UnblockTorrentSpy, most people get their .torrent files elsewhere. Torrent sites like Mininova, The Pirate Bay, Torrentz and Isohunt all benefited from the partial TorrentSpy shutdowns and continued to grow over the past months.

By the end of 2006 TorrentSpy was more popular that any other BitTorrent site, but times have changed. The graph below shows that Mininova now receives the most traffic, The Pirate Bay, Torrentz and Isohunt battle for second place and TorrentSpy dropped to the fifth position. 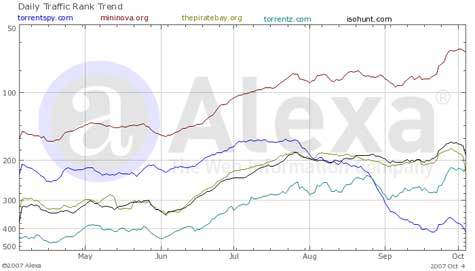 Censorship seems to be the new strategy employed by anti-piracy organizations these days. Not only did the MPAA manage to shut down TorrentSpy from US users, they’re also the reason why Isohunt blocked access to US users on their TorrentBox and PodTropolis tracker. The Pirate Bay on the other hand is banned in Turkey and even the P2P friendly Canadians are not safe anymore after the CRIA pressured demonoid to ban Canadians from their website.

Note: Alexa’s data gathering is quite dubious. The exact figures may be not be completely accurate for smaller sites, but it is a great tool (especially the traffic rank) to compare larger sites within the same niche and to get a global impression of traffic shifts over time.

The Most Popular Torrent Sites Of The Last Five Years

MPAA’s Hacking Past Comes Back to Hunt