BitTorrent is branded as a peer-to-peer technology, but despite this label the downloading process still relies heavily on central servers. In the first place there are the BitTorrent search engines and indexes such as The Pirate Bay and isoHunt. These are needed to search for content and to grab the .torrent file one needs to download a file.

Besides these torrent sites, most BitTorrent downloads are still managed by so-called trackers. These servers coordinate the download process and make sure that people can find others who are sharing the files they want to download. To a certain degree, trackers are no longer needed with ‘trackerless’ technology such as DHT, but even DHT often uses a central server to get a torrent started.

Finally central servers are used by moderators to help hunt spam and malware. All file sharing programs without such central checking have become practically useless over time.

In the last years these ‘central server’ vulnerabilities have caused a number of minor inconveniences for torrent users. When trackers go offline, downloads usually slow down or may stop entirely, and when a torrent search engine such as The Pirate Bay has technical issues, users have to search for alternatives.

To address these issues, ideally BitTorrent downloads should no longer require a central server. P2P technology should not only facilitate the downloading and sharing process, but also the searching and storage of torrent files. This may sound like a technology that might only become available in the distant future, but in reality it already exists.

The latest version of the Tribler BitTorrent client (Win, Mac and Linux), released only a few minutes ago, is capable of all the above and many more things that could be described as quite revolutionary. The client combines a ‘zero-server’ approach with features such as instant video streaming, advanced spam control and personalized content channels, all bundled into a single application.

The Tribler team has come a long way to reach the point they’re at now. We first reported on the ‘tax-payer-funded’ BitTorrent client in 2006, and in the years that followed tens of millions of dollars have been spent on the client’s development resulting in the latest 5.3 release. 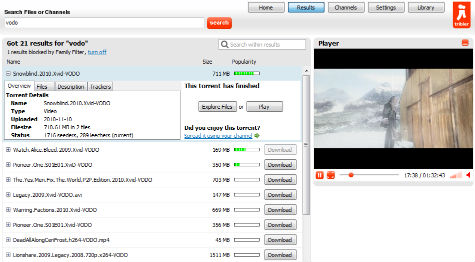 Despite the fact that only a few thousand people are using Tribler on a monthly basis, in technological terms it is one of the most advanced clients. People who install the client will notice that there’s a search box at the top of the application, similar to that offered by other clients. However, when one does a search the results don’t come from a central index. Instead, they come from other peers.

In fact, Tribler’s search functionality even has an auto-suggest function which is also built to work based on P2P data instead of a central server. Remarkably enough the response times for the searches and the auto suggest are both pretty fast, under a second in 99% of cases.

As for the downloads themselves, if one clicks on a ‘torrent’ in the search result, the meta-data is pulled in from another peer and the download starts immediately. Tribler is based on the standard BitTorrent protocol and uses regular BitTorrent trackers to communicate with other peers. But, it can also continue downloading when a central tracker goes down.

Tribler users can choose if they want to play the downloading file directly (if it’s video) with the built in VLC player, or wait for it to finish first. In addition to searching for files, users can also create their own channels or subscribe to those of others. Again, this is all based on technology that doesn’t require a central server. Other new features are subtitle integration, support for magnet links and advanced spam controls.

Spam control in a P2P program that actually works is something not seen before. The Tribler spam mechanism revolves around user generated “channels”, which may contain several thousands of torrents.
When people like a channel they can indicate this with “mark as favorite”. When more people like a channel, the associated torrents get a boost in the search results.

The idea is that spam and malware will automatically be pushed down to non-existence in search results and the majority of users will favor the channels they love. In scientific terms, this is a classic case of survival of the fittest and group selection at work. Again, this is done without central servers.

With the combination of P2P-based search, torrent downloads and moderation, BitTorrent sites have been almost rendered obsolete. Although we don’t see torrent sites going away any time soon it’s ‘assuring’ to see that there are alternatives. Tribler’s cutting edge technology allows users to search for torrents and download files without the need for any central server. A revolution, not only for BitTorrent but for P2P in general.

As mentioned before, the Tribler project is funded by tax payers money, most of which comes from EU grants. However, according to Dr. Johan Pouwelse, leader of the Tribler project at Delft University of Technology, those who complain that spending all this money on the development of a BitTorrent client is a waste, are wrong.

“Tax payer money is going into Internet research, which happens to use a very powerful technology called BitTorrent. That’s different. On a wider scale a few hundred million euros of research money is being spent on making computer networks more robust and improving video streaming. I think that is money well spent,” Pouwelse told TorrentFreak.

Eventually, Pouwelse and his team hope to shape the future of Internet-based video delivery, and this won’t just be limited to PCs either. “Our architecture has unbounded scalability and in principle can work on all TVs, phones and other devices in the world simultaneously,” he said.

“22 scientists are working full time in the P2P research team i’m coordinating at Delft University of Technology. A lot of the algorithms and Open Source code we write ends up in Tribler. Roughly 6 other universities or organisations contribute code regularly to Tribler. It’s by far the largest science-driven P2P effort around,” Pouwelse added.

Aside from the fact that the technology itself is both exciting and fully operational in the real world, there are some issues that have to be overcome. Due to the low userbase of Tribler, the total number of torrents that are findable is relatively low. About 20,000, which is quite low compared to the millions of torrents most BitTorrent sites index.

This means that most of the popular content is available but that obscure files will be harder to find. The only way to really change this is when more people start to use the client, which might take a few more domain seizures than we’ve seen thus far.

Many readers wonder why this is new compared to Kazaa, Exeem, LimeWire, Gnutella, eMule. Well, that explanation is a bit technical, here it goes. All these client either contain spam or use servers. For instance, Limewire Cooperation was sending out digitally signed instructions to block anti-piracy companies and spammers in general (157 pages of details).

Tribler does not use spam protection that originates exclusively from some cooperate headquarter or Swedish moderator server and does not use servers for search. After launching Tribler it quickly fills its integrated SQL light engine (pdf) with discovered content. It has a bias to talk to peers with the same download taste. Similar to how Google keeps out the Spammers using PageRank, Tribler uses a distributed reputation system (pdf).

Update: As pointed out by readers, there are other P2P-technologies that work fully decentralized, such as Kademlia. The decentralized “revolution” is limited to BitTorrent only.

There are 132 comments. Add yours?