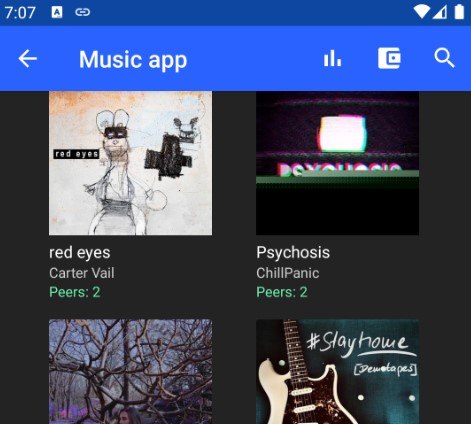 There is no denying that file-sharing has in large part helped reshape the music industry into what it is today.

The iTunes music store was embraced by the music industry as a weapon in the war against piracy, and the same is true for the streaming services that surfaced later on.

These new music outlets certainly helped to keep some people away from pirate alternatives. At the same time, however, they also reduced the massive profit margins that were once common. And they also made it easier for independents to publish music.

In recent years this development has continued. Increasingly, artists publish their own works, leaving out the major record labels. This is a trend that is likely to continue in the future, as new tools and outlets become available.

This hasn’t gone unnoticed at the Delft University of Technology in the Netherlands, the Tribler lab in particular. Over the years the researchers spent millions of euros on P2P and blockchain-related projects, with the Triber BitTorrent client as their flagship tool.

The goal of the projects is to show what’s technologically possible. This hasn’t resulted in widespread adoption, but their ideas and experiments are worth highlighting. That also applies to the new Trustchain app that was released in the Google Play Store.

Trustchain is basically a collection of mini-apps that use P2P networking and a blockchain to share and present information. There is a chat tool, for example, but also a music app.

The music app, a Master’s thesis project of Tim Wissel, immediately caught our interest for several reasons. Unlike traditional torrent clients, it is restricted to a specific subset of music torrents that are not copyright infringing. It includes only creative commons licensed tracks.

There are more differences too. For example, all the albums and tracks in the app can be streamed instantly with help from the underlying BitTorrent technology. That’s totally free, but users can leave a ‘tip’ if they like what they hear. These tips use an in-house cryptocurrency, which is entirely decentralized too.

The app is still in the experimental phase and people shouldn’t expect the slickness of modern streaming platforms. However, it is the idea behind the app that makes it stand out.

TorrentFreak spoke to Dr. Johan Pouwelse, leader of the university’s Tribler Lab, who notes that the music app shows how all middlemen can be taken out of the equation. Musicians can publish and monetize their content, without paying any fees, not even for hosting.

“We see that music labels, big tech platforms, and credit card companies skim up to 90% of the artists’ income. We fixed this ‘predatory intermediary problem’ by showing that music industry overhead can be as low as 0%,” Pouwelse says.

“All money donated in the ecosystem ends up with the artist themselves. No other solution offers this,” he adds.

After this bold statement, Pouwelse quickly corrects himself. The app uses its own DAO Bitcoin fork which offers mining rewards, so in reality, 99.999622% ends up as artist income. That’s still better than any alternative.

The researchers are not under the illusion that their app will replace anything instantly but the concept is solid. It is possible to create a system where artists are better rewarded.

For now, however, there are still quite a few restrictions. First and foremost, the system isn’t open to creators yet. If that happens in the future, they will obviously have to be vetted for legal reasons.

At the moment the app relies on Creative Commons content are there are currently a few hundred albums in the system. The team hopes to expand the library to half a million tracks in the near future.

The tracks are shared by users and the entire system can operate decentralized. However, to kickstart this process, there’s currently a massive seedbox running 24/7 at the university.

It’s an ambitious project, to say the least, but even if everything works and artists can join, success is far from guaranteed. Musicians and other artists need some kind of exposure, and an unknown app is not going to offer that right away.

Nonetheless, Dr. Pouwelse is confident that the various decentralized technologies they develop will help to shape the future one way or another. Not just for file-sharing, but also payments, and even voting.

Thus far, 187 students and scientists have contributed to the code. Pouwelse hopes this will eventually put people in control again, not big tech and large media corporations.

The music industry is also aware of the developments and this new music streaming app shouldn’t come as a surprise. They’ve had their time to shine.

“For the past 18 years, we have been warning them that their roaring party will end,” Pouwelse says.