In recent years many pirates have moved from more traditional download sites and tools, to streaming portals.

These streaming sites come in all shapes and sizes, and there is fierce competition among site owners to grab the most traffic. More traffic means more money, after all.

While building a streaming from scratch is quite an operation, there are scripts on the market that allow virtually anyone to set up their own streaming index in just a few minutes.

TVStreamCMS is one of the leading players in this area. To find out more we spoke to one of the people behind the project, who prefers to stay anonymous, but for the sake of this article, we’ll call him Rick.

“The idea came up when I wanted to make my own streaming site. I saw that they make a lot of money, and many people had them,” Rick tells us.

After discovering that there were already a few streaming site scripts available, Rick saw an opportunity. None of the popular scripts at the time offered automatic updates with freshly pirated content, a gap that was waiting to be filled.

“I found out that TVStreamScript and others on ThemeForest like MTDB were available, but these were not automatized. Instead, they were kinda generic and hard to update. We wanted to make our own site, but as we made it, we also thought about reselling it.”

Soon after TVStreamCMS was born. In addition to using it for his own project, Rick also decided to offer it to others who wanted to run their own streaming portal, for a monthly subscription fee. 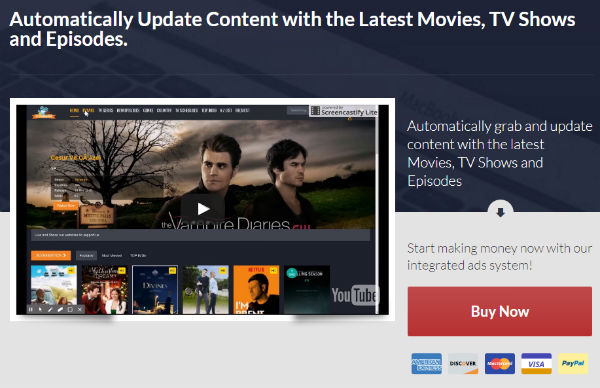 According to Rick, the script’s automated content management system has been its key selling point. The buyers don’t have to update or change much themselves, as pretty much everything is automatized.

This has generated hundreds of sales over the years, according to the developer. And several of the sites that run on the script are successfully “stealing” traffic from the original, such as gomovies.co, which ranks well above the real GoMovies in Google’s search results.

“Currently, a lot of the sites competing against the top level streaming sites are using our script. This includes 123movies.co, gomovies.co and putlockers.tv, keywords like yesmovies fmovies gomovies 123movies, even in different Languages like Portuguese, French and Italian,” Rick says.

The pirated videos that appear on these sites come from a database maintained by the TVStreamCMS team. These are hosted on their own servers, but also by third parties such as Google and Openload.

When we looked at one of the sites we noticed a few dead links, but according to Rick, these are regularly replaced.

“Dead links are maintained by our team, DMCA removals are re-uploaded, and so on. This allows users not to worry about re-uploading or adding content daily and weekly as movies and episodes release,” Rick explains.

While this all sounds fine and dandy for prospective pirates, there are some significant drawbacks.

Aside from the obvious legal risks that come with operating one of these sites, there is also a financial hurdle. The full package costs $399 plus a monthly fee of $99, and the basic option is $399 and $49 per month. 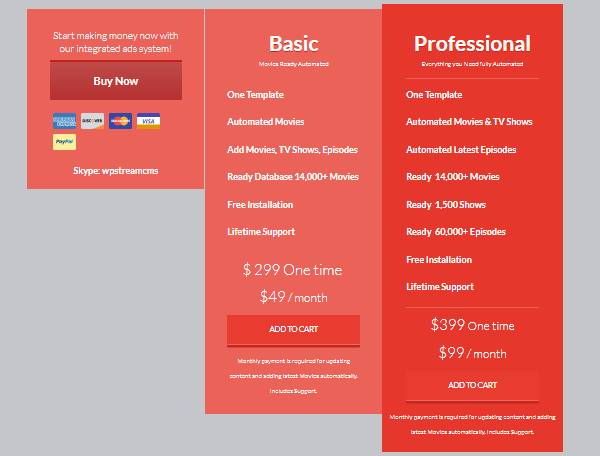 There are apparently plenty of site owners who don’t mind paying this kind of money. That said, not everyone is happy with the script. TorrentFreak spoke to a source at one of the larger streaming sites, who believes that these clones are misleading their users.

TVStreamCMS is not impressed by the criticism. They know very well what they are doing. Their users asked for these clone templates, and they are delivering them, so both sides can make more money.

“We’re are in the business to make money and grow the sales,” Rick says.

“So we have made templates looking like 123movies, Yesmovies, Fmovies and Putlocker to accommodate the demands of the buyers. A similar design gets buyers traffic and is very, very effective for new sites, as users who come from Google they think it is the real website.”

The fact that 123Movies changed its name to GoMovies and recently changed to a GoStream.is URL, only makes it easier for clones to get traffic, according to the developer.

“This provides us with a lot of business because every time they change their name the buyers come back and want another site with the new name. GoMovies, for instance, and now Gostream,” Rick notes.

Of course, the infringing nature of the clone sites means that there are many copyright holders who would rather see the script and its associated sites gone. Previously, the Hollywood group FACT managed to shut down TVstreamScript, taking down hundreds of sites that relied on it, and it’s likely that TVStreamCMS is being watched too.

For now, however, more and more clones continue to flood the web with pirated streams.