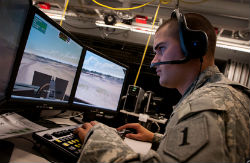 In recent years copyright holders have started hundreds of thousands of lawsuits against alleged pirates in Germany, demanding settlements ranging from a few hundred to thousands of euros.

These “trolling” ventures are more mainstream than in other countries and have even attracted the attention of the major Hollywood studios.

20th Century Fox, Universal Pictures and Warner Bros Entertainment, for example, are actively patrolling the Internet for people who download their work without permission. When someone is caught sharing their work, they can expect a settlement request of a few hundred euros in the mail.

Some of these letters have landed on the doorsteps of U.S. soldiers and civilians in the military community in Wiesbaden. This is not a big surprise, as these file-sharing networks and pirate sites are often the only way to enjoy recent U.S. movies and TV-shows.

To inform people about the threat of legal action, the Army Judge Advocate General’s Corps at the Wiesbaden base prepared an advisory document.

“It has become very popular to download music, films, and TV series in the privacy of the home,” the brief starts, quickly adding that unauthorized copying is against the law.

“Downloading copyright protected material whilst making it available to the public via peer-to-peer file sharing software is an offence in Germany and the user can also be held liable for damages to the copyright holder under German Copyright laws.”

The brief continues with an overview of how file-sharers are caught, and advises people to secure their wireless networks to prevent others from downloading copyrighted material over their connection.

Those who receive a settlement letter are advised to take it seriously. The cases that have gone to court thus far suggest that unless it’s a false accusation people only have limited resources to fight back.

“So what should you do if you received a demand letter from a law firm alleging an illegal download? Don’t ignore it, because mostly it can be assumed that the issued notice letter is basically legally sufficient.”

Most settlement letters demand a few hundred euros in damages and legal fees. U.S. soldiers and civilians who are targeted are not encouraged to pay up directly, but should consult a lawyer first.

“It is advisable not to communicate with the law firm and also not to sign any document, or to make any payments before consulting with an attorney,” the brief notes.

How many U.S. soldiers and citizens have been targeted remains unknown, but the document would not have been drafted on the basis of an isolated incident. Ironically, it appears that “the war on piracy” is one of the most serious threats U.S. soldiers face in Germany today.