UFC Just Sent the Most Embarrassing DMCA Notice Ever

While it might not yet have the high profile of the major Hollywood studios, the UFC is currently out-punching the movie business when it comes to anti-piracy activities.

As the leading mixed martial arts promotion in the world the UFC is hugely protective of its content. In recent times it has spent considerable sums lobbying in an attempt to have U.S. copyright law changed in its favor. Owned by Zuffa, the UFC would like to see streaming turned into a felony, with the aim of protecting their lucrative PPV events.

But while the instant money comes from their live shows, the UFC also makes money from selling post event DVDs and in order to protect that market the company hires several anti-piracy outfits to take content down.

The most visible of these actions are the DMCA notices Zuffa has outside companies send to Google. According to the search engine’s Transparency Report, Zuffa has used three companies to have more than 535,000 infringing links removed from Google’s indexes. Most of the time these are pretty standard fare, as the notice below illustrates.

While the above is an example of a highly targeted takedown (very specific URLs containing torrents to the actual infringing content) there is a growing trend at anti-piracy companies to employ a carpet-bombing mentality, rather sending in the required precision strike.

The terrible results of this broad brush approach can be seen in this very embarrassing notice sent by Zuffa / IP Arrow to Google on August 14. As can be seen from the screenshot, Zuffa is claiming that some pretty awful content is their property, and (worst still) the original copies can be found at UFC.com, which they obviously can’t. 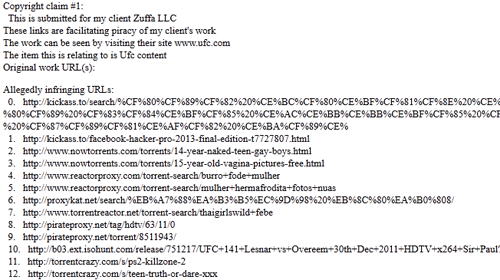 So how is this needless embarrassment being caused? No prizes if you guessed “automated crawlers.”

Instead of pinpointing specific pages carrying UFC torrents for example, the crawlers will target any other pages (even those created dynamically by search engines) that link to them, meaning that the generated DMCA notices deindex hundreds of other items that have nothing to do with the specific rightsholder. This, while often leaving the actual torrent page intact.

For example, this DMCA notice sent by Zuffa targets many URLs which initially appear to have nothing to do with UFC content. We’ve highlighted just one as an example.

On closer inspection the X Factor page has a section at the bottom titled “related torrents”. Sure enough, links to other pages that carry UFC content are listed. Instead of taking those down though, Zuffa’s anti-piracy company shot the messenger instead.

This carpet-bombing approach to takedowns is no doubt causing legitimate content to be censored too, so one might hope that embarrassing content in public DMCA takedowns will be enough for these companies to be a little more accurate in their work.

Anti-piracy companies working in this field have a difficult job, no one is doubting that. But wiping the freeway off the map when a mere side road has caused offense is hardly an acceptable strategy.