In common with the majority of all televised sports organizations around the world, the UFC has a problem with piracy of its events. That said, it’s interesting to note how times change.

While the UFC has always relied to some extent on PPV revenues, the biggest problem in the 1990s was getting the sport noticed and respected, particularly when compared to its obvious combat sports rival boxing. However, with those hurdles largely out of the way now, scraping every dollar, euro, and pound from significant markets around the world is a priority, and that inevitably requires dealing with pirates.

For those familiar with his style, it will come as no surprise that UFC President Dana White recently launched a foul-mouthed attack against a fan on social media. In response to White’s post about the return to ‘Fight Island’ and the upcoming rematch between Conor McGregor and Dustin Poirier, the person declared they were looking forward to pirating the event. In return, White warned of an upcoming “surprise”. 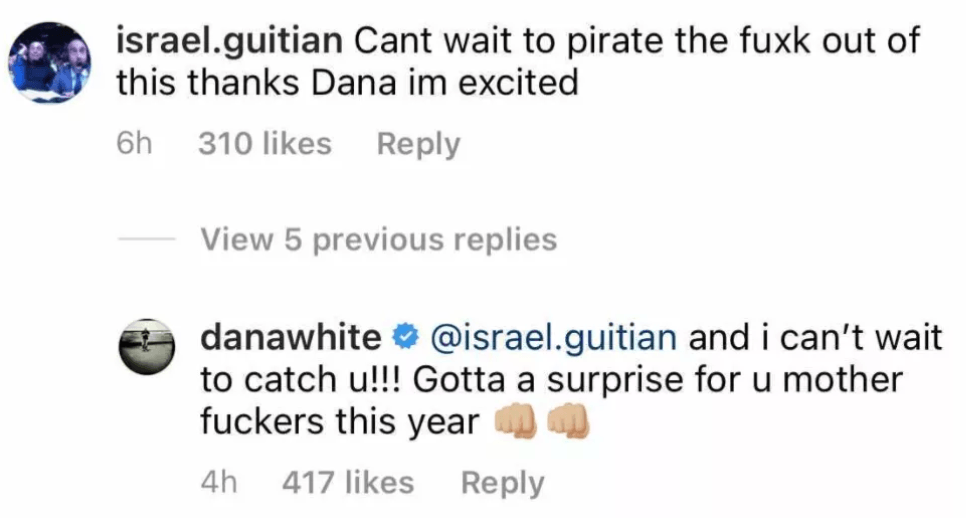 Since the statement was issued by White there has been much speculation as to exactly what he meant. Considering the person who made the original statement seemed to be a regular MMA fan, some believed that the UFC might be going after people viewing events illegally. Others believed that the UFC would only target sites and services offering UFC content without a license.

So what options do the UFC and Dana White have to combat piracy?

Unfortunately, that question doesn’t have a straightforward answer because the route they take all depends on how much time and money they’re willing to spend, whether they want value-for-money results, and/or don’t mind becoming busy fools. The short answer is there are many, many options but only a few make sense from commercial and PR perspectives.

No Surprise: Targeting Commercial Streaming Services in the US

Taking a single comment from White and extrapolating it into an accurate prediction of what the UFC will do this year specifically is problematic. However, the most obvious candidate for enforcement is via the newly-passed Protecting Lawful Streaming Act which transforms illegal streaming into a felony.

The UFC and organizations such as the NBA have been begging for this type of legislation for years since it effectively closes the so-called “streaming loophole” and allows for streaming site operators and IPTV providers to be targeted criminally.

Importantly, however, this legislation only allows law enforcement to target the operators of such services and does not include a provision for targeting consumers of illicit streams. That said, if we dig through the history books, we can see at least one successful action that targeted an end-user via unconventional means.

It began in 2010 when Dana White threatened to go after end-users while acknowledging it would cost a lot of money. Then, in 2012, the UFC successfully took down cagewatcher.eu, a website that illegally streamed two UFC pay-per-view events.

The big deal here is that the UFC obtained details of the streaming site’s userbase, including email addresses, IP addresses, user names, and information relating to individuals who watched pirated UFC events including UFC 169. That resulted in a default judgment that cost the target $11,948.70.

As far as we’re aware, no more end-users were targeted by the UFC but the matter does illustrate that if they really wanted to, the MMA company could gain access to information that would allow it to pursue individual pirates. However, the costs would probably outweigh the benefits, particularly from a PR perspective.

Enforcement Against Streaming Anywhere in Europe

While the US had to introduce new legislation to deal with streaming and IPTV platform operators, the situation in Europe is very, very different. Not only is running such a platform illegal under existing civil and criminal law in the EU but the intentional consumption of pirated content – streamed or otherwise – is illegal too.

Targeting end users has its challenges but as action taken in the UK shows, it is technically possible to identify streaming pirates and threaten them with offenses under the Fraud Act. No one has yet been prosecuted for simply watching pirated content but the possibility remains. If the likes of the Premier League and Sky can get the police on board, it’s certainly possible that the UFC and broadcaster BT Sport could too.

Given that the UFC is mainly concerned with the US market, it seems unlikely that it will take aggressive legal action around Europe. However, it can’t be completely ruled out, so predictions are adjusted for that.

Likelihood of targeting a streaming provider: Conor McGregor regaining a title belt and defending it once
Likelihood of prosecuting end-users en masse: Jon Jones getting disqualified after a first eye poke

The key difference between streaming and torrent sites is that content on torrent sites is distributed via their users. There aren’t that many sites operated from the United States anymore so users become the main targets. Sharing (aka distributing) copyrighted content is illegal in almost every region the UFC cares about and it has taken action in the past.

Steven Messina, known online as Secludedly, was targeted in 2014, reportedly apologized, and paid a $32m settlement to the UFC for his seeding of UFC events on torrent sites. In 2020, Messina told TorrentFreak that the while the UFC bullied him, he paid them nothing.

Then in 2015, at least partially at the behest of the UFC, the UK’s Police Intellectual Property Crime Unit arrested ‘Sir Paul’, the world’s most prolific uploader of UFC and World Wrestling Entertainment (WWE) content. The then 55-year-old, who was detained at his home in Leicestershire, was said to have cost the two organizations millions in lost revenue but what happened to him remains a mystery.

Likelihood of a UFC copyright-trolling campaign: Possible, but as popular as a Reebok fighter deal

Other Enforcement or Piracy-Discouraging Options

There are plenty of options if the UFC wants to sue a site or platform in the US or Europe but action in Russia during 2019 shows that it’s possible to get creative.

Following a meeting between local telecoms watchdog Roscomnadzor and UFC Russia vice president Andrei Gromkovsky, the UFC obtained an injunction that compelled local ISPs to block a pirate site. As far as we’re aware, no further platforms have been similarly targeted since.

One other outrageous option would be for the UFC to reduce its prices but having increased them in the United States just in time for UFC 257, that seems an unlikely proposition in 2021.

With a PPV package now costing $89.98, US customers may soon begin feeling the pinch. Meanwhile, customers of legal streaming platform S Sport Plus in Turkey, for example, not only get UFC events but those from NBA, NFL, WWE and the Premier League too – all for less than $23 per year.

Likelihood of UFC fans in the US being happy to hear that: A pinch of salt in an Olympic size swimming pool