UK Piracy Alerts: The First Look Inside the Warning System

In January it was revealed that UK ISPs and the movie and music industries had finally reached their years-long goal of sending infringment notices to pirating subscribers.

The alerts, which are claimed to be educational in nature, are part of the larger Creative Content UK (CCUK) initiative, which includes PR campaigns targeted at the public and classroom.

Until now, no one has published details of the actual alerts in public but thanks to a cooperative member of the UK public, TorrentFreak has the lowdown. The system we’ll show below relates to Sky, so other ISPs may or may not operate slightly differently.

The initial warning email from Sky 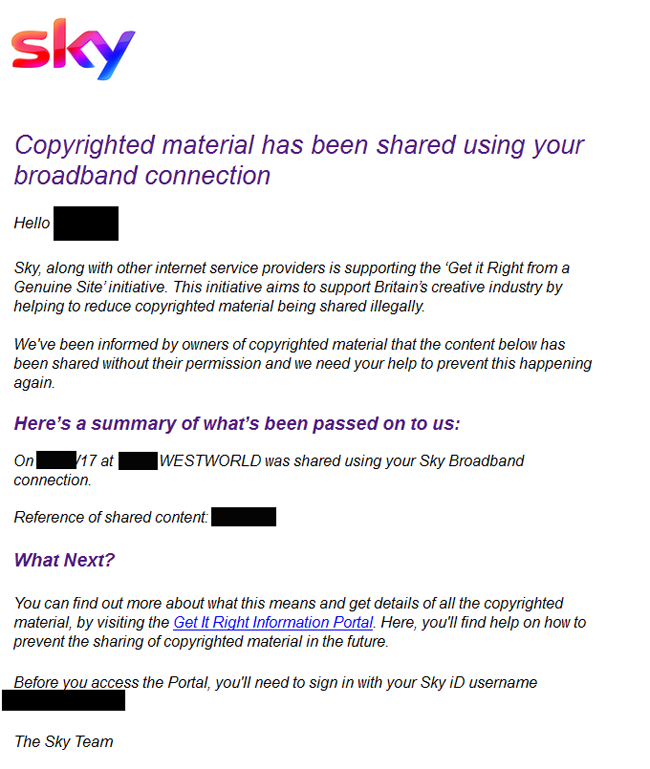 The email above has been redacted to protect the identity of our tipster. The blacked-out areas contain his name, the date in DD/MM/YY format, an alleged time of infringement in the HH:MM format, and a seven-digit reference code for the shared content, which is the TV show Westworld.

There is also a pair of links, one to sign into the subscriber’s Sky account (presumably this ensures the person signing in is the account holder) and a link to the ‘Get it Right Information Portal’. The first page before hitting that site looks like this. 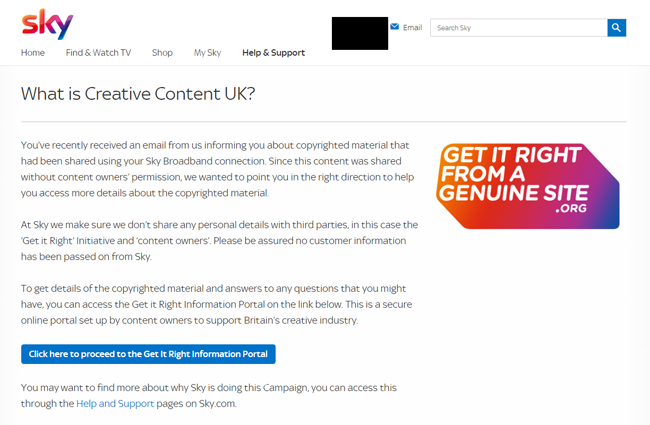 Once on the GetItRight site, the user is informed that his or her account has been used to breach copyright and that further information is available on the following pages.

There’s a report coming up 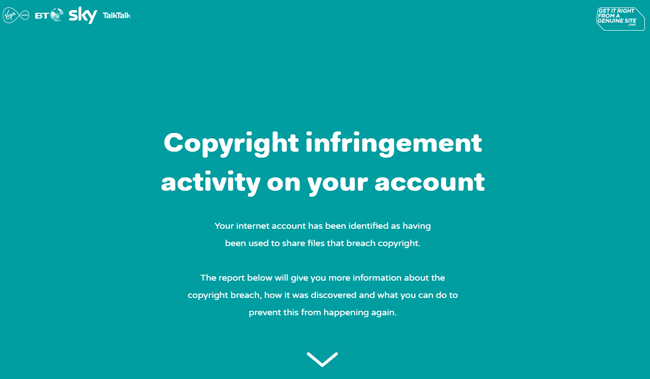 Following the links, the alleged infringer is presented with a page which provides a lot more detail. The CIR ID shown below is the same as the seven-digit code on Sky’s website. The date and time are the same, although in different formats.

The all-important IP address is listed alongside details of the software used to share the content. Also included are the filename and filesize of the infringing content and the copyright owner that made the complaint. 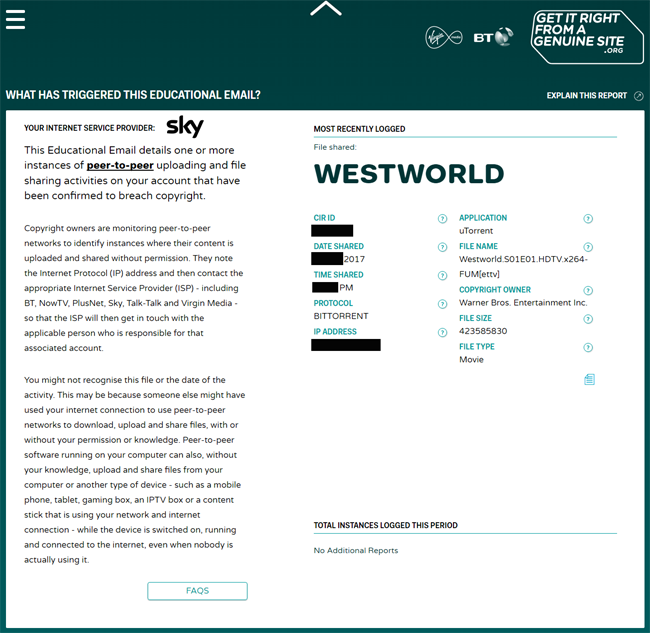 Interestingly, the system’s ability to track repeat infringers is evident at the bottom of the screenshot where the “Total Instances Logged This Period” can be seen.

Since the purpose of the campaign is to “educate” infringers, we asked our tipster a little about his habits, his impressions of the system, and how this warning will affect his future behavior.

“I was expecting [a warning] sooner or later as a heavy BitTorrent user. I’m sharing everything from movies, TV shows to games, but this email was about watching a TV show on Popcorn Time,” he revealed.

“This surprised me because I don’t use Popcorn Time very often and yet after approximately 10 minutes of usage I got an email the very next day. Isn’t that funny?”

So in this case, the warning was not only accurate but was also delivered to the correct person, rather than merely the person who pays the bill. We asked our tipster if he was aware of the GetItRight campaign before receiving this warning and whether it would achieve its aims.

“I don’t think [the warnings] will work, at least not on a big scale. Maybe they will educate some people who did it by mistake or did it just once but for someone like me there is no hope. But at least the campaign is not aggressive.”

Interestingly, the education factor in this particular case appears to have somewhat backfired. Our tipster said that thanks to news coverage of the warnings, he knew immediately that there would be no consequences for receiving one. That put his mind at rest.

However, he did indicate that he may change his habits after receiving the warning, particularly given Sky’s claim it will ask subscribers to remove file-sharing software if they’re caught multiple times.

“[The threat to remove software] upsets me as a long-term Sky customer. But I won’t comply, I will either subscribe to another ISP provider or start using VPNs,” he said.

“I might stop using Popcorn Time as I wasn’t using it too often anyway, but I will keep using BitTorrent,” he added. Of course, Popcorn Time has BitTorrent under the hood, so both can trigger warnings.

Received a warning from a UK ISP? Contact TF in complete confidence.

The Day Shall Come…When Content Companies Address the Streaming Farce

‘Get it Right’ Hopes High-Profile Social Influencers Can Deter Piracy