In addition to the mobile restrictions that have been in place for years already, last summer Prime Minister David Cameron announced a default filter for all Internet connections. This means that UK Internet subscribers are now required to opt-in if they want to view ‘adult’ content online.

These default filters have led to many instances in which perfectly legitimate sites can no longer be accessed. This very website, for example, was inaccessible on Sky Broadband after it was categorized as a “file-sharing” site. The false positive was eventually corrected after the BBC started asking questions, but that didn’t solve the underlying problem.

In an attempt to make it easier to spot overblocking the Open Rights Group (ORG) has today launched a new site. The embedded tool runs probes on all the major broadband and mobile filters of UK ISPs, and allows people to check which sites are blocked and where.

The first results are quite scary. A review of the 100,000 most-popular sites on the Internet reveals that 20% are blocked by at least one of the filtering systems.

The list of blocked domains includes many legitimate sites that aren’t necessarily harmful to children. TalkTalk file-sharing filter, for example, blocks websites including bittorrent.com and utorrent.com. TorrentFreak also appears to be listed in this category and is blocked as well.

Linuxtracker, which offers free downloads of perfectly legitimate software, is blocked by Sky, TalkTalk and Three’s filters, while the blocked.org.uk tool itself is off-limits on BT, EE and Virgin Media.

Perhaps even worse, the BT and TalkTalk filters also categorize social networking sites such as Facebook and Twitter as potentially dangerous to children, and the same applies to Reddit. All these sites are inaccessible if the social networking category of the Kids Safe filter is on. 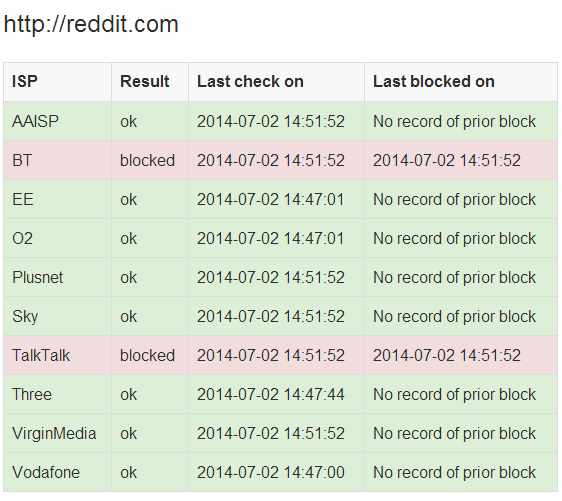 With the new tool ORG hopes to provide more insight into what these filters do and how many sites they block. The ISPs themselves have thus far failed to reveal the scope of their filters.

“People need to know what filters are, and what they block. They need to know they are inaccurate, and also disrupt people’s businesses and speech,” Killock tells TF.

“If people feel they need them, that is their right, but they should at least know they’re very flawed technology that won’t protect them very much, but will also be likely to cause them problems. In short, they are a bit rubbish,” he adds.

The current results of the tool are based on various filtering levels. This means that the list of blocked sites will be even longer when the strongest settings are used.

Update: TalkTalk clarified that the file-sharing (with TorrentFreak included) and social networking filters are not enabled by default on their system.