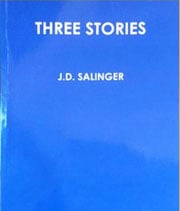 From very early in its life the Internet became a mine of amazing things, but while accessing information was relatively easy for most, becoming a publisher was a different matter.

Soon enough regular people learned the skills to put up a rudimentary webpage, but it wasn’t until the advent of mainstream file-sharing networks that anyone could become a publisher of information, simply by putting a file in a folder.

As a result countless pieces of media – from music and video, to documents, artwork and software – were distributed by individuals to every corner of the Internet-enabled globe.

Over the years many thousands of curiosities have appeared online in this manner, such as unfinished movies, unreleased songs, top-secret military documents, plus all manner of sundry ephemera subsequently given almost eternal life. Today, fans of writer J.D. Salinger will have something particularly extraordinary to talk about.

What.cd, an invitation-only BitTorrent tracker, is probably the most coveted source of music on the Internet. The site is a veritable goldmine of audio of every conceivable genre, all wrapped up in the best software interface the BitTorrent site world has to offer. But technicalities aside, what the site has is an incredible community that contributes to the enjoyment of every other member of What.cd, and not just with music either. 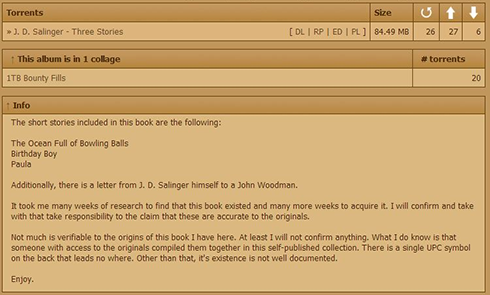 As can be seen from the screenshot above, the first story offered was The Ocean Full of Bowling Balls, a coveted piece some Salinger experts describe as a “superior” work.

“Of great intrigue are the works of JD Salinger which he has determined to remain unpublished,” reads a piece on Dead Caulfields, a site dedicated to the works of the writer.

“The author’s decision to withhold these pieces is a never-ending source of speculation. Initially, Salinger anxiously submitted many of these stories to various magazines for publication, but by 1950, he increasingly begins to draw them back. The term ‘unpublished’, when referring to Salinger, is but a mild indication of the ferocity with which these works are guarded,” the site explains.

Only adding to the intensity is the fact that The Ocean Full of Bowling Balls is only available to read at the Princeton library and under supervision in a special reading room. It is one of two titles bound up in a legal agreement which forbids the release of the work until fifty years after Salinger’s death. He passed away in 2010.

Of course, that agreement now lies in tatters. The stories have escaped What.cd and are already doing the rounds on The Pirate Bay and other torrent sites. Only adding to the previously unpublished works’ availability, the entire set now available for anyone to read on image upload site, Imgur.

This leak, like hundreds before it, raises many questions, both legal and moral.

As his work, Salinger was obviously entitled to do whatever he liked with these stories and following his death those wishes seem to have been carried out by those he entrusted them to. However, one has to question why even after death someone would choose to consider a work so ‘exclusive’ as to wrap it up in security and hide it away from those who might enjoy it most.

Has Salinger been financially damaged due to the works being made widely available to anyone who cares to read them? Absolutely not. Is Princeton in a worse position now that the lid has been blown off their ‘secret’ possession? Hard to say.

There will be those who say that morally the user on What.cd shouldn’t have uploaded the stories as this was against Salinger’s wishes. But isn’t the world a richer place today now that he has? If information isn’t shared and people aren’t allowed to benefit from its availability, one really has to question the point of its existence.

Whether Salinger fans are delighted or outraged at these leaks, one thing is pretty much certain. No matter what side of the fence they sit on, fans will read these stories – possibly several times over – and worry about the morals later.