There can be little doubt that Game of Thrones has turned out to be somewhat of an epic. The show has millions of fans all over the world but of course, not all of them have been paying for the experience.

In fact, Game of Thrones has become the most-pirated show and ever since that news broke people have been weighing in on the debate.

Show director David Petrarca said shows like Game of Thrones thrive on “cultural buzz” and piracy, he suggested, helps to move that along. HBO programming president Michael Lombardo and actor Rose Leslie, who plays Ygritte in the show, both described piracy as a “compliment“.

Now, a senior figure in authority (with the most grand title thus far) has thrown his opinion into the mix. Speaking in support of this week’s 17th annual UN World Book and Copyright Day, Jeffrey L. Bleich is the Ambassador Extraordinary and Plenipotentiary of the United States of America to Australia. This longtime friend of Barack Obama is unhappy at what has transpired.

“The file-sharing news website TorrentFreak estimated that Game of Thrones was the most-pirated TV series of 2012. One episode was illegally downloaded about 4,280,000 times through public BitTorrent trackers in 2012, which is about equal to the number of that episode’s broadcast viewers. In other words, about half of that episode’s viewers stole the program from HBO,” said the diplomat. 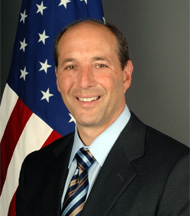 “As the Ambassador here in Australia, it was especially troubling to find out that Australian fans were some of the worst offenders with among the highest piracy rates of Game of Thrones in the world. While some people here used to claim that they used pirate sites only because of a delay in getting new episodes here, the show is now available from legitimate sources within hours of its broadcast in the United States,” he said.

Of course, good things often come from piracy. In response to the download controversy, HBO said it would try to air Game of Thrones more quickly in Australia in order to remove one of the prime reasons for people obtaining the show through unauthorized channels.

But, said the Ambassador, airing delays and other complaints are no excuse for theft.

“I realize that fans of Game of Thrones who have used illegal file-sharing sites have reasons. They will say it was much easier to access through these sites, or that they got frustrated by the delay in the first season, or their parents wouldn’t pay for a subscription, or they will complain about some other issue with copyright laws. But none of those reasons is an excuse – stealing is stealing,” he said.

Imploring fans to boycott “big businesses that make money by encouraging consumers to illegally upload material”, Ambassador Bleich asked people to imagine a scenario in which everyone downloaded Game of Thrones for free, season 3 was never made, and the show was off the air.

But Bleich’s comments weren’t well received by fans on Facebook who were less than sympathetic.

“You are an uninformed idiot, Bleich,” said one. “Why not tell HBO to allow people to subscribe to their online service around the world without having to pay for cable TV AND HBO just to get HBO Go?”

“Most of the commercial sites where we could actually watch stuff for free (that the U.S has access to) block our [IP addresses],” said another. “Content is always delivered later on our TV and rarely are shows like this delivered to free-to-air. We welcome U.S film makers etc to start treating us with some respect, not say ‘You can watch what everyone else has when WE say so’.”

In fact, digging through the dozens of comments one is hard pushed to find any that are sympathetic to the Ambassador’s plea. That being said, the vast majority aren’t boasting about getting something for free either. Instead one reads complaint after complaint from people wanting to buy a product but are being underserved by HBO.

We’ve often commented that piracy is a market signal, but it’s definitely worth saying again.