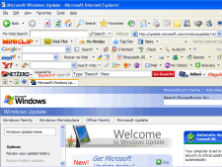 For a year a bundled browser toolbar has been one of the main sources of income for uTorrent’s parent company BitTorrent Inc. The toolbar is offered to new users and is offered as an option with fresh installs.

With a few dozen million downloads a year, the added browser toolbar has provided BitTorrent Inc and the uTorrent development team with a healthy and much needed revenue stream. Initially, the Ask toolbar was promoted but recently a switch was made to the Conduit toolbar.

In addition to offering the toolbar to users who do a fresh install of the uTorrent client, the new Conduit toolbar was also promoted to users who upgraded to the latest uTorrent 2.2 release. However, this process didn’t go as smoothly as it should for everyone, and several TorrentFreak readers reported serious issues during the upgrade process.

Over the last few days the uTorrent forums have been filling up with several of these confused users, and others wrote blog posts addressing this unexpected behavior and their frustration.

Despite several complaints the issues seem to be relatively isolated. We’ve tried to reproduce the “bug” on several systems but at our end everything went fine. Simon Morris, Vice President of product management at BitTorrent Inc. told TorrentFreak that they have no idea what went wrong either, but that they are aware of isolated issues.

“It has not escaped our notice and it is obviously NOT our intent,” Morris said.

Initially BitTorrent Inc. and uTorrent’s forum moderators denied that there was a problem at all. Instead, they were convinced that users must have selected the wrong checkboxes, which can be perceived as deceptive by some. However, this position became harder to hold as time went by and complaints kept coming in.

“We have seen some isolated suggestions that the toolbar installed even though the checkboxes were unselected. If this is indeed true then we would consider it a very serious bug. If anyone can help us reproduce this type of bug then we will investigate it and fix it immediately. In spite of extensive tests we have been unable to reproduce this particular problem,” he added. 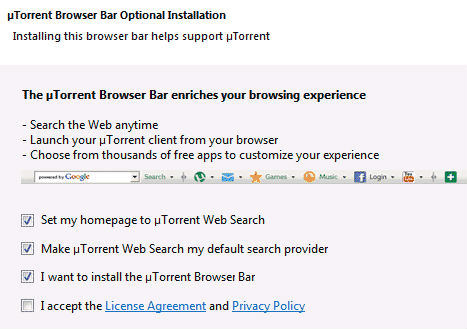 Morris further said that because of this massive rollout to all upgrading users, the level of attention is probably more amplified than usual. Many long time users see the toolbar offer for the first time and might be caught by surprise, or confused by the checkboxes. Although this is partially true, it would be wrong to simply deny that something went wrong during the upgrade process for some people.

The uTorrent team has promised to get to the bottom of the issue, and fix any errors that they come across.

“Both our team and Conduit’s team have been investigating further whether there is any problem with the install, but we have been unable to find any evidence that the toolbar will ever install if you deselect all 3 checkboxes. Conduit has found and is fixing one minor uninstall issue,” Morris said.

“We regret any dissatisfaction, and we welcome inputs on anything that may be going wrong. One thing is very clear – the offer is designed to be purely optional, such that if you deselect the offer checkboxes it will not install,” he added.

All uTorrent users who had the Conduit toolbar installed ‘accidentally’ can easily remove it via the Windows control panel where the software is listed as ‘Conduit’ and ‘uTorrent toolbar.’ Did you have any issues upgrading to the latest version of uTorrent or did it go smoothly? Please let us know and drop a comment.