Of course, there is nothing wrong with uTorrent. The application somehow got listed in Avast’s list of trojans, resulting in a false positive. uTorrent 1.7.7 was mistakenly listed as “Win32:Poison-DU [Trj]”, whereas the newer Beta’s were unaffected.

Such ‘false positives’ often happen with other harmless applications – better safe than sorry- but since uTorrent doubled its user base in just 12 months and is installed on millions of computers, this problem affected a sizable number of people. It didn’t take long before the issue was reported to Avast, and after approximately 5 hours the problem was fixed.

Earlier this week it became clear that uTorrent’s WebUI (+ Azureus and TorrentFlux) were vulnerable to several exploits. Apparently the vulnerabilities in the webUI, allow outsiders to take over uTorrent and download random content onto one’s system.

uTorrent developer Greg Hazel told TorrentFreak that he is aware of the issue and working on a fix. For now, the BitTorrent client itself is perfectly safe and secure. 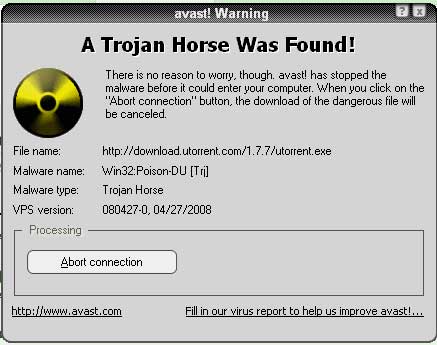