Thus far, only Windows users have had the pleasure of running uTorrent. The client saw its first public release in September 2005, and soon became the most widely used BitTorrent application. In 2006, uTorrent was acquired by BitTorrent Inc., who continued to develop the application, and promised a Mac version too.

The Mac version came later than expected. One of the initial developers was taken off the project, and the others were focusing more on the Windows release. This August, however, uTorrent developer Greg Hazel told TorrentFreak that the first public Alpha version of the Mac release would be ready in a few weeks.

It now seems that someone has beat the uTorrent developers to it, as an early release was posted on The Pirate Bay a few hours ago. A leak of the BitTorrent client, developed in Cocoa, seemed to be inevitable. As mentioned before, it is an Alpha version, and not all the features seem to work like they should (search is broken), but it’s definitely a good start.

Simon Morris, BitTorrent’s VP of Product Management told TorrentFreak in a response to the leak: “Apparently an internal development build of uTorrent for Mac has been leaked publicly. It has been referred to as an “alpha” quality build. The unfortunate part is that we did not intentionally release this build and would strongly recommend folks not to use it as it isn’t yet complete or stable enough to be released to the public.”

“The good part is that this is a testament to the fact that we’re serious about releasing uTorrent for Mac in the near future. (And counter to recent rumors, this is indeed the uTorrent code-base ported onto OSX, not just Libtorrent with a Mac UI). Hopefully more news coming soon. We have a sign-up page on the uTorrent website.”

Most of the people who have tried the application are reporting that the application is fully functional, but that it’s clearly an Alpha release. Nevertheless, the first reviews are quite positive. “It seems like the uTorrent every Mac-owner has been waiting for is coming,” an early user told TorrentFreak.

We posted some screenshots of the leaked Alpha release below, click to enlarge. 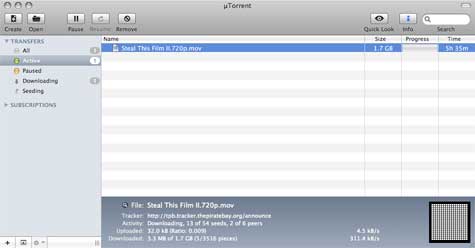 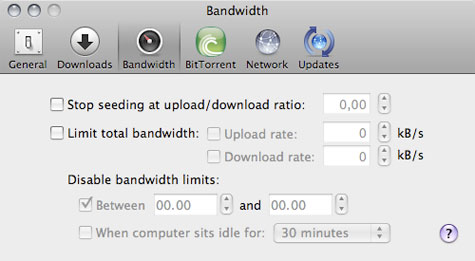