Day in and day out automated bots detect and report millions of alleged copyright infringements, which are then processed by the receiving site without a human ever looking at them.

Needless to say, this process is far from flawless. In the past we’ve covered countless false, inaccurate, and just plain hilarious DMCA claims, but YouTube’s takedown process is particularly problematic.

As we have noted previously, YouTube copyright claims are in a class of their own, thanks to a one-sided notification system that has no evidentiary requirement. Nowhere was this more apparent than the Mega song takedown of late 2011, but it’s a constant problem.

The main issue is that automated bots don’t (or rather can’t) understand fair use, although to be fair, it’s an area of copyright law most labels seem to want to ignore when it suits them, and one that won’t be fixed until Lenz v Universal finishes its slow trip through the courts.

But in the meantime, many artists are still stuck dealing with systems that ignore significant sections of copyright law in order to keep things under lock and key, artists like Dan Bull for example.

Dan, as regular TorrentFreak readers will know, is an artist that relies heavily on fair use to create his music, and he recently gave fans an idea of just how much of a pain it can be.

For his 2010 [NSFW] song “I’m not pissed”, he reveals a screen-grab showing 18 separate claims that have been made against it. While some of them were released after being disputed, two of them, BMG Rights Management and PRS, rejected the dispute and stand by their initial claim.

“It is up to me to prove myself innocent by asking eighteen different publishing companies through an automated system to revoke the automated claims. Each publisher has a month to reply, with no obligation to even do so. If even one of the eighteen publishers says ‘nope’ then it’s back to square one,” Bull explains.

“Any financial loss or restrictions on my channel are entirely on me, and will not be compensated for once the claim is lifted. This has been going on since last year with no end in sight,” he adds. 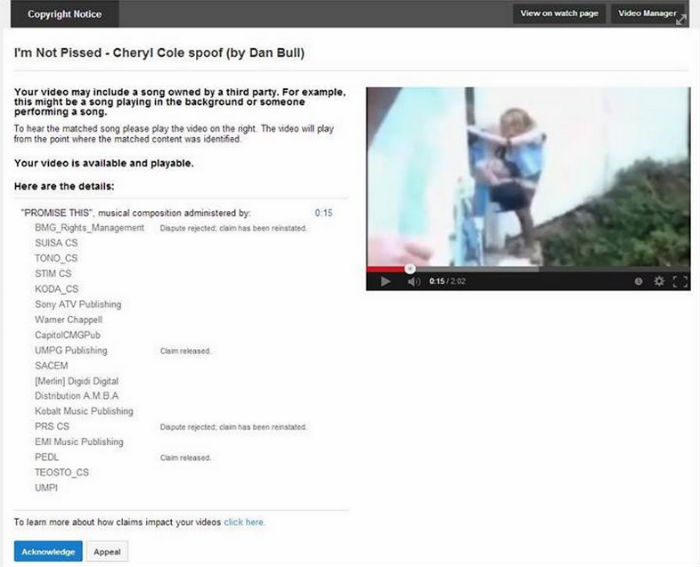 It’s a situation that discourages new artists and stifles creativity. Despite the claims of the major labels, and until some actual consequences are introduced for false, inaccurate, or over-reaching claims, it’s going to harm the greater creative world, just to enable the big guys to profit.

Meanwhile, Dan has expressed his ire at YouTube in the way he knows best, through [again NSFW] song.