Automattic, the company behind the popular WordPress.com blogging platform, receives thousands of takedown requests from rightsholders.

A few days ago the company published its latest transparency report, showing that it had processed 9,273 requests during the first half of 2017.

This is more than double the amount it received during the same period last year, which is a significant increase. Looking more closely at the numbers, we see that this jump is solely due to an increase in incomplete and abusive requests.

Of all the DMCA notices received, only 22% resulted in the takedown of allegedly infringing content. This translates to 2,040 legitimate requests, which is less than the 2,342 Automattic received during the same period last year.

This logically means that the number of abusive and incomplete DMCA notices has skyrocketed. And indeed, in its most recent report, 78% of all requests were rejected due to missing information or plain abuse. That’s much more than the year before when 42% were rejected.

Automattic’s transparency report (first half of 2017) 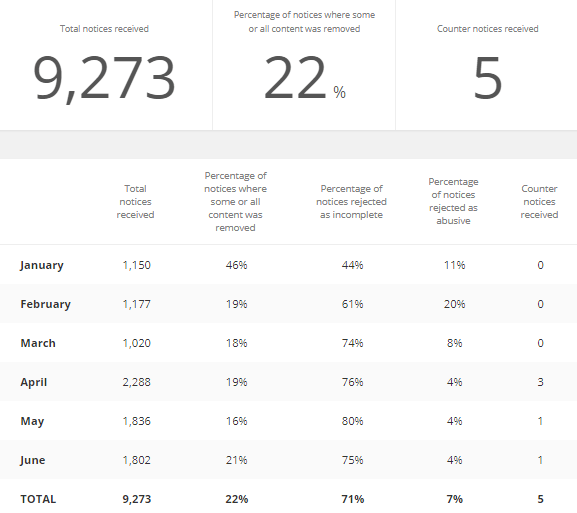 WordPress prides itself on carefully reviewing the content of each and every takedown notice, to protect its users. This means checking whether a takedown request is properly formatted but also reviewing the legitimacy of the claims.

“We also may decline to remove content if a notice is abusive. ‘Abusive’ notices may be formally complete, but are directed at fair use of content, material that isn’t copyrightable, or content the complaining party misrepresents ownership of a copyright,” Automattic notes.

During the first half of 2017, a total of 649 takedown requests were categorized as abuse. Some of the most blatant examples go into the “Hall of Shame,” such as a recent case where the Canadian city of Abbotsford tried to censor a parody of its logo, which replaced a pine tree with a turd.

While some abuse cases sound trivial they can have a real impact on website operators, as examples outside of WordPress show. Most recently the operator of Oro Jackson, a community dedicated to the anime series “One Piece,” was targeted with several dubious DMCA requests.

The takedown notices were sent by the German company Comeso and were forwarded through their hosting company Linode. The notices urged the operator to remove various forum threads because they included words of phrases such as “G’day” and “Reveries of the Moonlight,” not actual infringing content.

Fearing legal repercussions, the operator saw no other option than to censor these seemingly harmless discussions (starting a thread with “G’day”!!), until there’s a final decision on the counter-notice. They remain offline today.

It’s understandable that hosting companies have to be strict sometimes, as reviewing copyright claims is not their core business. However, incidents like these show how valuable the skeptical review process of Automattic is.

Google Gets More WordPress.com Takedown Requests Than WordPress Itself