Similar to other projects that work on adding a BitTorrent download manager to Firefox such as FireStorm, FoxTorrent and BitFox, the goal of Wyzo is to make downloading torrents as easy as downloading any other file inside your browser.

However, unlike the others, Wyzo does not limit itself to existing Firefox users. They try to target a large audience, mostly of people who are new to BitTorrent, or people that don’t need the advanced features most standalone clients offer.

Jon from Wyzo explained to TorrentFreak:

“Our primary target audience is not people who already use BitTorrent, it’s people that don’t. Despite the fact that our FireTorrent extension still contains most of the advanced features that die-hard torrent users would expect to see, but we don’t anticipate they will be swayed from using near perfect applications such as Azureus and uTorrent; instead, our focus to reach out to those users that don’t even know what a BitTorrent is, or a Firefox extension for that matter.”

Personally I think this is a great approach, since it will be nearly impossible to compete with a client like uTorrent. It is also wise to release the Firefox standalone extension, because existing Firefox users are not likely to switch to Wyzo, even though it basically has the same look and feel.

I’ve tried Wyzo and the FireTorrent extension for Firefox with a couple of torrents and it seems to be working quite well. BitTorrent support is seamlessly integrated with the regular download manager of the browser, and doesn’t require any configuration. Wyzo comes with a decent set of configuration options such as bandwidth control, protocol encryption, proxy support, and port randomization.

In sum I would say the Wyzo’s BitTorrent extension (FireForrent) is one of the best BitTorrent browser extensions I’ve seen so far, and it could be very useful for people who are new to BitTorrent. Let’s hope they release their Firefox extension soon.

Wyzo can be downloaded here, and the FireTorrent extension over here. The browser is currently only available for Windows and OS X but a Linux version is expected to be released this summer. 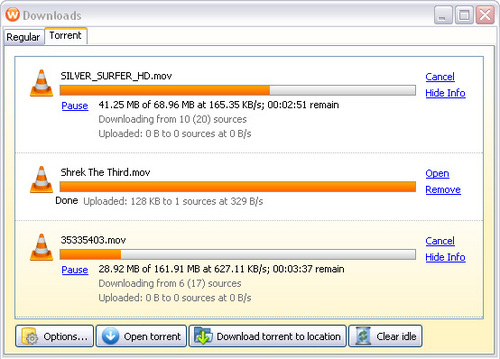