In 2020, the RIAA attempted to have YouTube-ripping tool youtube-dl removed from Github and in the wake of that, YouTube-ripping service Yout filed a preemptive lawsuit against the RIAA.

Yout said that the RIAA’s earlier efforts to have its homepage delisted by Google, on the basis that Yout circumvented YouTube’s ‘rolling cipher’ technology, were wrongful and damaging to its business.

Yout asked the court to declare its service legal on the basis that, contrary to the RIAA’s allegations, its software platform is not designed to “descramble, decrypt, avoid, bypass, remove, deactivate, or impair” YouTube’s so-called ‘rolling cipher technology’.

Over time the case became increasingly complex, with the RIAA seeking to have the lawsuit dismissed, Yout fighting back, and the RIAA countering.

As a result, last month the presiding judge took the decision to dismiss the case without prejudice after both Yout and the RIAA brought up additional facts about how YouTube works. This gave Yout the opportunity to go back to the drawing board to file its second amended complaint. it has now done just that.

Yout’s new filing still seeks declaratory relief relating to 17 U.S.C. § 1201 – the anti-circumvention provisions of the DMCA. It also claims that the RIAA made misrepresentations that Yout is infringing under U.S.C. § 512(f) resulting in business disparagement and defamation.

In many other respects the claims against the RIAA remain unchanged but, what stands out in particular, is the characterization of the Yout service, the explanation of how it operates, and the nature of YouTube’s ‘rolling cipher’.

“This lawsuit involves Internet content that can be accessed using a web browser (‘Web Content’) using a unique hyperlink, uniform resource locator (commonly referred to as ‘url’), or ‘web address’ that directs computing devices to such content, respectively, on the Internet,” the second amended complaint (SAC) reads.

“[T]his lawsuit does not involve any Web Content that has been hidden from view by use of a cipher or other means of concealing content or meaning. Again, quite simply, this lawsuit involves Web Content publicly accessible by anyone with an Internet connection and a web browser,” it notes.

In keeping with the original complaint, Yout characterizes itself as a time-shifting service, in that it allows users to access content from YouTube, make a copy of that content on their local machines, and then access that content at a time and place of their choosing, without needing an Internet connection. Content owned by Yout’s law firm is used as an example. 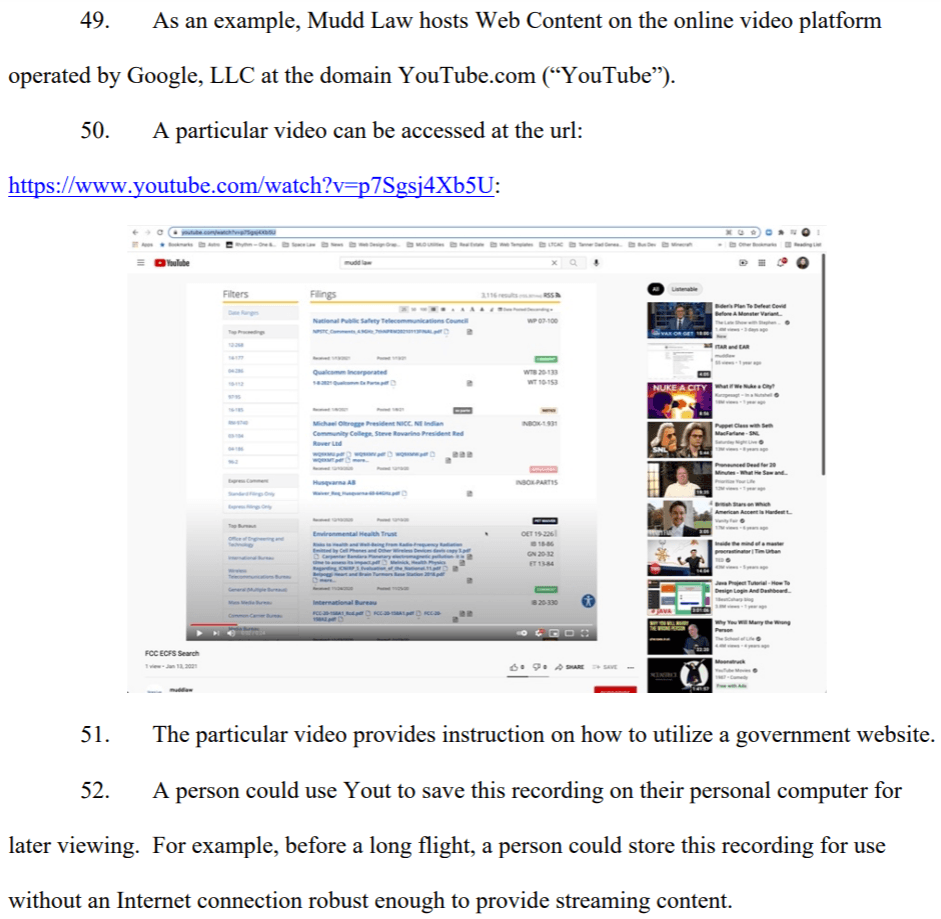 Yout then moves on to the heart of the complaint – the RIAA’s allegations that Yout decrypts, descrambles or otherwise circumvents protections put in place by YouTube.

According to the SAC, YouTube does not implement Digital Rights Management (DRM) mechanisms used on protected media such as DVDs, for example. Instead, YouTube content plays on any HTTP user agent with a JavaScript interpreter, not simply on players that are specifically authorized to access the platform.

Yout says that when YouTube plays content, it merely checks that the accessing browser has a JavaScript interpreter, such as those deployed by Yout, youtube-dl, and other tools that have no relationship with YouTube or the record labels.

“By way of comparison, a DVD player has a secret key embedded in it that must be obtained from the rightsholders pursuant to a license, but a browser does not. YouTube doesn’t license browsers to play YouTube. Therefore, even if the YouTube player source code is ‘a process or a treatment,’ it doesn’t require ‘the authority of the copyright owner’ as required by the statute because it’s already been provided to everyone in the world,” the SAC notes.

From here, Yout explains in detail how anyone with a web browser such as Chrome can download audio files from YouTube. In summary, Yout says that all it does is automate these steps, making life easier for the regular user who may want to download and store content for time-shifted consumption.

Referencing the DMCA anti-circumvention notices sent by the RIAA in order to have Yout delisted from Google search, the ripping service says that if protection measures are put in place, it cannot help users download that content.

“Contrary to [RIAA’s] allegations, Yout’s software platform is not designed to descramble, decrypt, avoid, bypass, remove, deactivate, or impair any technical protection measure or any technological measure that effectively controls access to a work protected by the Copyright Act. In fact, any digital mechanism in place designed as anti-circumvention technology stops Yout users from recording and saving that protected work, thereby demonstrating Yout’s compliance with any anti-circumvention protections in place,” Yout notes.

“Yout does not violate Section 1201 of the DMCA because it does not circumvent any technological measure on YouTube videos. Similarly, the ‘rolling cipher’ mechanism that the RIAA argues is employed by YouTube does not prevent copying of videos or other digital media. The term ‘rolling cipher’ is a misnomer and a term likely coined and relied upon by Defendants to argue that services like Yout are somehow breaching a protection that doesn’t exist.”

Yout also suggests that in respect of YouTube, ‘rolling cipher’ is a term being promoted by the RIAA but in practice, it’s not a DRM or technological measure that effectively controls access to a work protected by the Copyright Act.

Yout says that prior to the RIAA’s campaign to have YouTube-ripping platforms delisted from Google using the anti-circumvention provisions of the DMCA, public perception was that these services were legal. Thanks to the RIAA, however, third parties now believe that Yout is an illegal platform.

The ripping service raises the analogy of a VHS tape that can be used to record MTV or an educational broadcast from PBS, noting that the technology used by Yout does not in itself constitute a violation of the DMCA.

In summary, Yout wants its platform declared legal by the court, specifically under the anti-circumvention provisions of the DMCA. Yout also wants the court to hold the RIAA liable for knowingly misrepresenting infringement in its DMCA notices to Google and seeks compensation for the RIAA’s allegedly false statements relating to the Yout platform and the nature of its business.