As one of the largest online file-sharing services, 4shared is closely watched by copyright holders whose work is made available on the site.

The site itself has a DMCA takedown procedure in place so rightholders can remove files directly, but Google also receives its fair share of takedown notices for the site.

Over the past several years the search engine has received a mind-boggling 50 million takedown requests for 4shared URLs. Most of these, 35 million, were submitted during the past year alone.

The popular file-hosting site tops Google’s list of most reported domain names at the moment, way out in front of rapidgator.net and uploaded.net, which are in second and third place respectively. 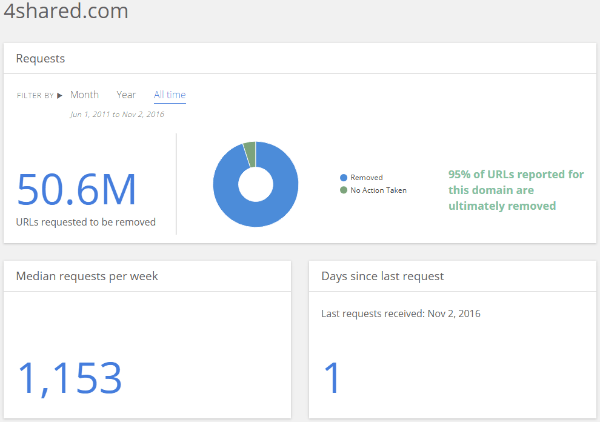 While it may look like 4shared is the piracy kingpin of the Internet, over the years the service has taken various measures to decrease infringing activity.

For example, the site uses advanced fingerprinting technology to scan for pirated music files based on a unique audio watermark. When infringing files are found they are removed from public view.

“We tried communicating with RIAA and IFPI, especially because of their possible participation in our music identification system,” 4shared’s Mike Wilson previously told TorrentFreak.

“We did not receive any assistance, so we started with music ID by ourselves and in just one year it helped to reduce the number of copyright complaints by 16 times, while the volume of stored information is actually still growing.”

Instead of working with 4shared directly the music industry group are taking their complaints to Google, resulting in the 50 million milestone this week.

On top of that, the RIAA also reported 4shared to the U.S. Government, listing it as one of the prime pirate sites on the Internet, and scolding the fingerprinting system they apparently aren’t using themselves.

“4shared remains one of the most popular cyberlocker sites in the world. It is also the source of a staggering volume of infringing files,” RIAA wrote adding: “Clearly their audio fingerprinting is at the very least ineffective.”

Ten Websites Hit With 70m DMCA Complaints in a Year