The company has filed lawsuits against alleged pirates in the United States, Europe, Canada and Australia, and is estimated to have made a lot of money doing so.

Most of these cases target downloaders of the Oscar-winning movie Dallas Buyers Club. Voltage Pictures is one of the production companies behind the film, but as is common in Hollywood, it’s not the sole rightsholder.

In fact, another company named “Dallas Buyers Club LLC” (DBC) has also filed dozens of cases against pirates. While one might think that both rightsholders are working in tandem, they are in fact fighting over the anti-piracy loot behind the scenes.

In a case DBC and Truth Entertainment filed against Voltage Pictures last year (pdf), the latter is accused of various deceptive practices, including breach of contract and fraud.

The two plaintiffs suggest that Voltage has been holding back money from foreign proceeds. They further state that the production company hasn’t been open about its practices.

Aside from claims that money has gone missing, its anti-piracy methods are also under the spotlight. According to DBC, Voltage hasn’t provided any details on enforcement actions, nor has it shared any of the proceeds from its anti-piracy efforts.

“DBC entered into an Agreement with Voltage to act as its agent to enforce Anti-piracy actions against people who have illegally downloaded or otherwise obtained the ability to watch the movie without paying for the right to watch it,” the filing reads.

“The only updates DBC receives are thorough, mostly negative, media reports about the actions of Voltage around the World. DBC has not received any funds, reports, updates or any information from Voltage on the status numerous lawsuits filed around the World in the name of DBC.” 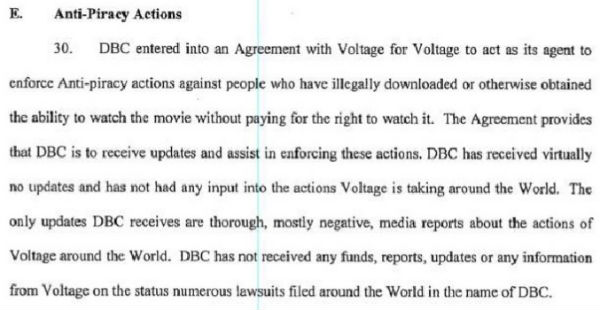 While the paperwork doesn’t explicitly state that both parties agreed to share the anti-piracy bounty, the claims above suggest that this is the case. Most interesting, perhaps, is that it’s unclear whether all enforcement actions are ultimately driven by Voltage.

This confusing situation is casting doubt over the legitimacy of these piracy lawsuits, as FCT highlights. This prompted Nicholas Ranallo, attorney for an accused “pirate”, to ask a California federal court for an extra safeguard.

Ranallo mentions that there is doubt over who owns the movie and he cites the legal battle between Dallas Buyers Club LLC, in whose name his defendant was sued, and Voltage.

“It is unclear what rights (if any) are actually held by Voltage Pictures or the suing entities, though it is abundantly clear that Voltage Pictures controls the litigation and keeps the proceeds collected on behalf of the purported plaintiffs,” Ranallo writes.

The amended complaint against the accused pirate identifies Dallas Buyers Club LLC as the owner, but the original complaint listed Truth LLC as such. Then again, the DVD cover and other material list Voltage as the copyright holder.

“Various advertising and promotional materials cast further doubt about the claims that Dallas Buyers Club LLC owns the relevant copyright(s), and reveal a myriad of entities that have, at one time or another, claimed copyright in the film.”

As a safeguard, Ranallo asks the court to require Dallas Buyers Club to post a $50,000 bond (pdf), to secure costs and attorney fees if the suspicions do indeed hold ground.

While it’s not uncommon for several companies to have a stake in a single movie, it will be interesting to see if this case leads to more clarity over the rights they have to pursue a copyright claim in court.